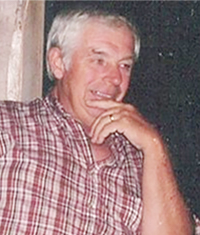 Bill was born in Watertown on December 5, 1941. He entered the US Air Force on February 2, 1961 and was honorably discharged as an Airman First Class on October 29, 1965. He married Cathy A. Marshall on December 6, 1985 in Brownville with Rev. Jack Cox officiating.

Bill worked for NY Airbrake. He then retired from Bernier Carr and Associates as a survey technician. His passion was woodworking, but was a master of all trades. He enjoyed being outdoors, four-wheeling, and his camp near Chase's Lake, Brantingham.

He is survived by his wife, Cathy; his loving cat, Drifter; two sisters-in-law, Pamela Kostyk and husband Gerald, Dexter and Mary Thorigal and companion Chris Manning, Watertown; one brother-in-law, Tyler Thorigal, Syracuse; and several nieces. Bill was predeceased by his nephew, Andrew Thorigal and his parents-in-law, K. Duane and Mary Jean Marshall.

Services at North Watertown Cemetery will be at his family's convenience. Arrangements are entrusted with Cummings Funeral Service, Inc., Watertown and online condolences to Bill's family may be posted at www.cummingsfuneral.com. In lieu of flowers donations in his name may be made to either SPCA of Jefferson County, PO Box 531, Watertown, NY 13601 or Parkinson's Disease Foundation, 1359 Broadway #1509, NY, NY 10018.

Our hearts are broken. You and Bill have always been family to us and mom. We will remember fondly all of the wonderful times spent at camp enjoying weekend dinners together, playing cards and sitting around the fire. We will miss Bill dearly but he will always be in our hearts and minds.

Fly high on eagle’s wings, Bill and give my dad a hug for me.