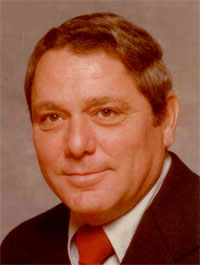 A graveside service will be held at the convenience of the family at Glenwood Cemetery. There will be no calling hours or funeral service and arrangements are with Cummings Funeral Service, Inc., Watertown.

Mr. Oliver was born in Watertown on April 23, 1932, son of Joseph C. and Angeline Geglia Oliver. He graduated from Watertown High School, received his BS from Oswego State, and did graduate work at Syracuse and St. Lawrence Universities and Oswego and Potsdam State Colleges.

On December 19, 1953 he married Jan Branche in the rectory of St. Anthony's Church with Rev. James Flattery officiating.

He serviced in the US Air Force during the Korean Conflict, and served two years in Laon, France. After four years in the Air Force, he was honorably discharged as a Staff Sergeant.

He began his educating career as a teacher for the Watertown City School District. He was a school administrator, which included serving as Principal of North Junior High School, and Mr. Oliver retired in 1987. He was a life member of the American Legion in Brownville, a member of the NYS Retired Teacher's Assoc., and enjoyed nature.

Besides his wife, Jan, he is survived by his son, Dr. James B. Oliver, wife, Kimberly, and their children, Jaime and Laurel Oliver, Watertown; his daughter, Nan O. Campione, and her children, Elaine and Richard Knight and Daniel Campione, Lake Orion, MI; sister, Rose E. Frattali, Watertown; two aunts, and several nieces, nephews, and cousins.

In lieu of flowers, the family wishes donations in his name to either the Vincent R. Oliver Scholarship Fund, c/o JCC Foundation, 1220 Coffeen St., or the Watertown Urban Mission, 247 Factory St., both in Watertown, NY 13601 or to a charity of your choice. Online condolences may be made at www.cummingsfuneral.com.