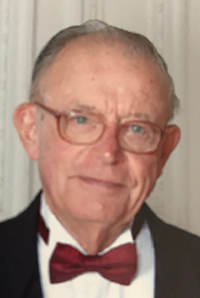 Richard was born in Poughkeepsie on July 20, 1927, son of Henry P. and Eunice Fishcher Hof. He was a graduate of Poughkeepsie High School, Bliss Electrical School, Tacoma Park, MD, and attended Clarkson University.

On July 11, 1945 he entered the US Navy. He served on several ships, including the USS Eugine E. Elmo, USS Stafford, and USS Suesens and received the Victory and American Theater Medals. He was honorably discharged as a Seaman First Class on August 5, 1946.

He retired as a Senior Customer Engineer for IBM, Poughkeepsie after 37 years of service to the company. Richard was Episcopal. He had been the Deputy Director for Orange County Emergency Management Office and was a 40 year member of the Goshen Fire Dept. He also was a member of the American Legion Colon-Couch Post 821 in Clayton. Richard enjoyed fishing, boating, and playing cards.

A memorial service will be held at a time and date to be announced. As per his wishes, he will be donating his body for scientific research. Donations in his name may be made to either Hospice of Jefferson County, 1398 Gotham St., Watertown, NY 13601 or St. Cyril's Church, 26 Walton St., Alexandria Bay, NY 13607. Arrangements are entrusted with Cummings Funeral Service, Inc., Clayton and online condolences to his family may be posted at www.cummingsfuneral.com.