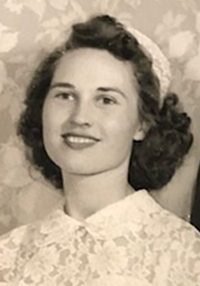 Louise Henry White of Clayton, who operated a La Fargeville business with her husband for more than 30 years, passed peacefully with her family by her side on Good Friday, April 2, 2021, at Samaritan Keep Home. She was 97.

The daughter of Ernest L. and Mildred Eckert Henry, she was born in La  Fargeville, at the home of her grandparents on March 8, 1924. She was raised on a farm in the Great Depression, where her hard work and tenacious attitude cultivated a life-long determination to succeed.

She was a 1941 graduate of La Fargeville Central School and later the Watertown School of Commerce. During World War II, she was employed at Pine Camp (Ft. Drum).

Prior to her marriage, she and her husband were both employed at General Electric in Syracuse. After the birth of their child, Marie, the couple purchased the Texaco station in La Fargeville and operated it until 1956. They then joined the family business, the George Henry Company, later the La Fargeville Agway. Louise enjoyed many years as the bookkeeper at the “Mill” and the lifelong friendships that developed during that period.

Louise grew up in the Big Band era and still was dancing at 90 to "The Sound". She was able to talk to anyone without hesitation and had the uncanny ability to make new friendships through those encounters.

She always kept in touch with her old classmates and was passionate about reunions. Most of all, she treasured her family and looked forward to family gatherings. When she became a grandmother to Kate and Teddy, the sparkle and love in her eyes were unmistakable.

Louise is survived by her daughter, Marie Louise White-Ebbing and Daniel Ebbing of Clayton; two grandchildren, Kate Louise and her husband, Steven Larvarnway of Clayton, and Theodore Charles Ebbing of Rochester; three great-grandchildren, Madelyn Rose, Daniel Philip, and Aria Louise; a brother, Donald Henry, and his wife, Jean, of Watertown; a brother-in-law, Roy White, and his wife, Peggy, of Owego; several beloved nieces, nephews and cousins. Her two siblings, Marie H. Ryan and Maurice Henry, both predeceased her.

A celebration of her life at the Clayton United Methodist Church is scheduled for Thursday, May 20, at 11 a.m. Masks will be required for attendance. Arrangements are being handled by Cummings Funeral Service, Inc., Clayton, and online condolences may be posted at www.cummingsfuneral.com. In lieu of flowers, donations may be made either to the Clayton Methodist Church, 324 John St., Clayton, NY 13624 or TIERS, 855 Graves St., Clayton, NY 13624.

#4 David Rioldazzi 2021-04-09 20:05
Marie- please accept our sincere sympathy for your loss-Ted and Louise were fine people and I will always consider them as part of my LaFargeville Family! David and Jayne Riboldazzi.
Report to administrator
#3 Terry 2021-04-06 20:48
My heartfelt condolences to the family and friends of this dear lady. Not only a joy but an honor to have cared for Louise during her stay at Jefferson Hospice; memories of her beautiful smile will forever be etched in my mind. Prayers for you, Marie ... may the Lord provide the comfort you need at this time.
Report to administrator
#2 Terry Lantier 2021-04-04 22:01
Marie and family, I was so sorry to learn of Louise's passing. It's been a tough week for the White's and Bristol's. That's such a pretty picture of her on the obit. Be blessed.
Report to administrator
#1 gary klock 2021-04-04 09:52
Louise was always the best to me growing up in LaFargeville. So sorry for your loss, she will be missed.
Report to administrator
Refresh comments list