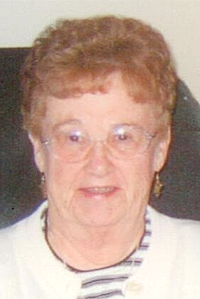 Evelyn was born in the town of Clayton on February 8, 1930, daughter of the late Clive E. and Ruth D. Blanchard Spalsbury and she was a 1947 graduate of Clayton High School. On September 3, 1950 she married Kenneth T. Sutton at the Clayton United Methodist Church with Rev. Solomon Card officiating. Mr. Sutton died on October 13, 2007.

She lived on the Sutton family farm in Burrville for ten years, moved to the town of Rutland in 1960, and to the city of Watertown in the 1970's. In 1999 the couple moved to Ogdensburg and she has lived in New Jersey since 2008.

Evelyn enjoyed being a homemaker and crafting. She had been active as a Sunday school teacher and member of the Copenhagen PTA. She was a Junior Grange Matron and a member of the National Grange where she held several offices at local and county levels.

She is survived by her two daughters, Julie J. Sutton and her wife Marianne Yewaisis, Whiting, NJ and Jill J. Sovie and husband Timothy, Franklin, TN; three grandchildren, Elizabeth DelGiacco and husband Michael, Saint Croix, Virgin Islands, and Judson Smith and wife Casey and Matthew Smith and wife Jacquline, all of Franklin, TN; nine great-grandchildren; and several nieces, nephews, and cousins. Along with her husband, Ken, Evelyn was predeceased by her brother Robert B. Spalsbury, sister Lois V. Byrne, and brothers- and sisters-in-laws, William R. Sutton, Carolyn and Marshall Rudd, and Richard and Adeline Sutton.

A graveside service will be held in Clayton Cemetery at a time and date to be announced. Arrangements are entrusted with Cummings Funeral Service, Inc., Clayton and online condolences to her family may be posted at www.cummingsfuneral.com. Donations in Evelyn's name may be made to your local Parkinson's Foundation in memory of Evelyn and Kenneth.

#1 Mark Sutton 2021-02-19 10:17
Sorry for the loss of your mother our thoughts and prayers are with you. Sutton Family
Report to administrator
Refresh comments list