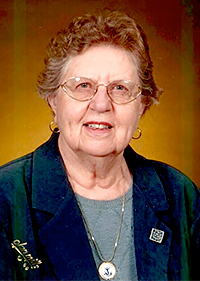 Mrs. Taylor taught in Watertown public schools where she was the originator and Coordinator of the Home Centered Preschool. She also taught in Union Springs, Canisteo, Greenwood, and Burlington (NJ) Township. She retired from Greenwood Central School in 1989. For five years she was a medical secretary and diet counselor for the Aurora (NY) National Health Service Clinic. In 1952 Mrs. Taylor worked for the YMCA of Tuscaloosa, AL doing Girl's Clubs and Day Camping Work.

She was an active member of the First Presbyterian Church, Watertown where she served as an Elder, Deacon, Stephen Minister, and choir member. She was past Moderator of the Watertown Presbyterian Women and Moderator and Treasurer of the Presbyterian Women of Northern NY Presbytery. In 2011 Mrs. Taylor was awarded Honorary Life Membership by the National Council of Prebyterian Women for her outstanding leadership in various phases of Women's Presbyterian activities. In 1999 she received a Paul Harris Award from the Sunrise Rotary Club, Watertown. She was also a member of the Watertown YMCA, NY Retired Teacher's Assoc., the P. E. O. Sisterhood, the Balsam Twig of the Samaritan Medical Center Auxiliary, AAUW, the Red Hat Society, and the YMCA Retirees.

A graveside service will be held at Brookside Cemetery, Watertown at a time and date to be announced. There are no funeral services at this time due to COVID 19 as per her wishes. Arrangements are entrusted with Cummings Funeral Service, Inc., Watertown and online condolences to her family may be posted at www.cummingsfuneral.com. In lieu of flowers, contributions in her name may be made to either First Presbyterian Church, 403 Washington St. or Watertown YMCA, 119 Washington St., both in Watertown, NY 13601.

#3 Sophie Lawrence 2021-02-03 12:43
I only knew Bernie from the RAC meetings we attended.
She was well liked and respected. She was a strong person and seemed to enjoy life. My thoughts and prayers are with the family.
Report to administrator
#2 Charlotte Bach 2021-02-02 09:05
Brown family,
I became a friend with Bernie 3 years ago when we moved to Ives Hill. She was a remarkable woman and one many have emulated, I'm sure. We will all miss her and her let's do it! attitude.

My thoughts and prayers are with you at this difficult time.

Charlotte Bach
Report to administrator
#1 Jim Hearne 2021-02-02 01:37
GodSpeed Bernie
Give my best to Bill, you two were quite the team and are together again.
It was an absolute please to have known you.
Condolences to the Brown Family.
Thank you for sharing Bill and Bernie with all of us.
God Bless you all.
Report to administrator
Refresh comments list