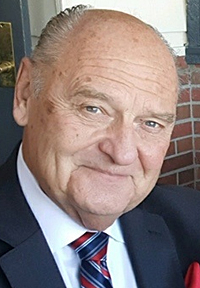 Jon was born in Ogdensburg (NY) on February 14, 1941, son of Merman Fred and Lillian E. Mason Wilder. He was a beloved member of the St. Mary's Academy Class of '59 in Ogdensburg and graduated in 1961 from Canton Agricultural and Technical College in Canton (NY). He married Patricia Crane of Carthage (NY) and together they had six children.

Jon had a wide-ranging and deep career in the fields of finance and banking beginning and throughout the early-to-mid '60s at Marine Midland in Watertown (NY). In 1974, Jon moved his family to Saranac Lake (NY), taking a branch manager role at the newly built Farmers National Bank. Jon had ever-increasing management roles throughout the '70s and '80s with Farmers National and, after it was purchased by Key Bank N.A., was Vice President of Key's multi-branch Adirondack Region. Jon's banking career culminated in the '90s as President of Community National Bank, Corning (NY). Jon finished his professional career with a 10-year Executive Directorship of the Ceramic Corridor Innovation Center, a ceramics and nanotechnology incubator in Painted Post (NY).

Throughout his career Jon sat on more than a dozen public and private boards. Jon was a resident of Auburn (NY) and a parishioner of St. Mary's Church, Auburn. He enjoyed hunting, fishing, gardening, song birds (feeding over 50 species), dancing, horseshoes, playing cards (especially pinochle and rummy) and patriotic/conservative politics, but mostly he loved warm weather, a cold beer, Syracuse basketball, the Yankees, a good story, a funny joke, spending time with his growing family, quiet prayer and (as an accomplished Boy Scout) being prepared - which he was.

In lieu of flowers, donations in Jon's name may be made to St. Therese Foundation, 1701 E. Empire St., Suite 360-301, Bloomington, IL 61704. Online condolences to his family may be posted at www.cummingsfuneral.com.

#5 Janette Smith 2021-01-16 21:52
My thoughts and prayers are with all of you during this difficult time.
I worked with Jon for many years at the Ceramics Corridor; I have many fond memories of Jon during those years.
Report to administrator
#4 Mary Montroy-Beard 2021-01-14 11:40
So sorry to hear of Jon's passing. We were classmates at St. Mary's Academy class of 1959.
Report to administrator
#3 Bob Recore 2021-01-14 11:31
I worked with Jon at Farmers Bank while he was in Saranac Lake. Remember his wife Patty and children. He was a friend and I will miss him. Prayers for the family.
Report to administrator
#2 Robert Michael Wells 2021-01-12 17:41
My prayers are with Jon and his family. I recall many days at football and basketball practice with
Jon.
I also recall our trip to Glens Falls for the basketball championship, Jon and I roomed together, at the Queensbury Hotel.

Robert m. Wells
St. Mary's Academy
Class of 1958
Report to administrator
#1 Neil A Belair 2021-01-12 13:38
So sad for your father--Jon and I grew up in Watertown.
I Iived at 715 Mill St. and Jon was just around the corner.
Habebs store was right between us. I remember when he moved to Ogdensburg as his dad was a manager at Kamargo Furniture
I moved to the Rochester area in 1953--Have tried to locate Jon all these many years with no luck.Our friends
were Terryl McIntire and David Bence and Jerry Greene---He was a great friend--Neil Belair
Report to administrator
Refresh comments list