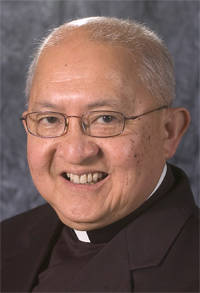 Due to the pandemic, details of the arrangements are not being released publicly. Reverend Arthur J. LaBaff, Vicar Forane of the Jefferson Deanery, will preside over the reception of the body at St. Paul's Church in Black River. The following day, the Most Reverend Terry R. LaValley, Bishop of the Diocese of Ogdensburg, will celebrate the Mass of Christian Burial, with the priests of the diocese concelebrating. Reverend Kevin D. McEwan will offer the homily. Father Jazmines will be laid to rest at Glenwood Cemetery in Watertown. Arrangements are entrusted with Cummings Funeral Service, Inc. and online condolences to his family and church family may be posted at www.cummingsfuneral.com.

Vicente Jazmines was born on February 2, 1944 to Dr. Vicente H. and Soledad Ocampo Jazmines in city of Catbalogan, the capital of the Samar province, Philippines.

He attended De La Salle College in Manila, Philippines from 1962 until graduating with a double major in 1966 and applied his business degree at positions in Manila. While working, he attended Ateno de Manila University in Quezon City, Philippines and in 1969 received a Master of Business Management degree.

He emigrated to Toronto, Canada in 1971 where Vicente continued working and became a Canadian citizen in 1976. That year, he began his priestly formation with the Archdiocese of Toronto. He received his undergraduate theology degree from Saint Paul University in Ottawa in 1980. He returned to studies, obtaining a Master of Theology degree from the University of Saint Michael's College in the University of Toronto in 1988.

In 1991, Father Jazmines was granted sabbatical from the Toronto Archdiocese to teach Spanish as a faculty member of Wadhams Hall Seminary-College, where he also served as the Director of Finance. In 1992, he was incardinated into the Diocese of Ogdensburg.

Father Jazmines learned the diocese serving as administrator at St. Patrick's Church, Brasher Falls; St. Patrick's Church, Hogansburg; St. Augustine's Church, Peru; St. Joseph's Church, Owls Head; St. Helen's Church Lake Titus and St. Mary's Church Malone with a brief time as Parochial Vicar at St. Paul's Church in Black River. He became pastor of St. James Church in Gouverneur in 1996, during which time he was part time chaplain to the Gouverneur Correctional Facility. He was then pastor at St. Augustine's Church in 1999, and St. Bernard's Church in Lyon Mountain and St. Michael's Church in Standish between 2005 and 2006. Father Jazmines then spent twelve years serving as chaplain to the clients and staff of the St. Lawrence Psychiatric Center in Ogdensburg. Before retiring, Father Jazmines wanted to serve again as a pastor and began serving the communities of Black River and Evans Mills at St. Paul's Church and St. Mary's Church.

He will be remembered for desire to serve, his easy manner, love of good food and travel.

Rev. Vicente Jazmines is survived by his brother and sister-in-law, Drs. Hermilo and Lydia Jazmines of Florida, their daughter Melissa Ann and family in Illinois and their daughter-in-law Rebecca and family in Colorado. He is predeceased by his parents and nephew Paul. A memorial service will be held when the family can safely travel.