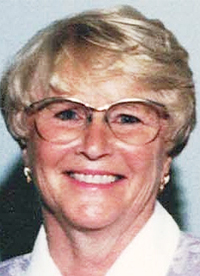 Mabel "Mamie" Heath, 85, formerly of TI Park, passed away Thursday evening, December 10, 2020, at Samaritan Summit Village where she had resided for three years.

Mamie was born in Alexandria Bay on July 11, 1935, daughter of Ralph and Althea McAllister Denner. Mamie graduated from Alexandria Bay Central School in 1953.

Mamie was the librarian at the Thousand Island Park Library for 55 years, retiring in July of 2017.

Mamie was a proud member of the Red Hat Society and enjoyed playing Mahjong with her friends. She loved to play golf and was a member of the TI Park Ladies golf league. Her greatest passions were books, the St. Lawrence River and her family, especially her four grandchildren and their spouses as well as her 8 great-grandchildren.

Mamie is survived by her two sons and their wives, Steve and Diane Heath, Wellesley Island, Chris and Nancy Heath, Wellesley Island and Miromar Lakes, FL.; four grandchildren and their spouses, Kristy and Pete Carey, Megan and Matt Krause, Ryan and Shelby Heath, and Nicole and Chris Baird; eight great-grandchildren, Teddy, Charlie, Lucie, Max, Connor, Ellie, Jack and Brooks; and numerous nieces, nephews and cousins. Along with her husband Charlie, she was predeceased by four sisters and one brother.

A private family graveside service will be held at Riverside Cemetery, Wellesley Island. Donations may be made in her honor to the Thousand Island Park Library, c/o Thousand Island Park Corporation, 42822 St. Lawrence Ave., Box 1103, Thousand Island Park, NY 13692. Arrangements are entrusted with Cummings Funeral Service, Inc., Clayton and online condolences to her family may be posted at www.cummingsfuneral.com.

#1 Ike Mitchell 2021-01-02 10:35
Steve, Chris and family,
So truly sorry to learn of your Mom's passing. Such a kind, wonderful soul. All the times spent a your Mom and Dads when we were in school are treasured memories.
Report to administrator
Refresh comments list