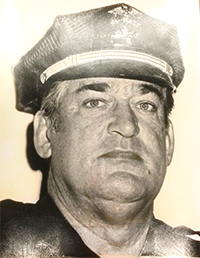 John was born in Ft. Covington on April 4, 1930, son of Antoine and Ida Mae (Bodway) Cascanette. He attended Watertown schools, Canton ATC, and the FBI Academy at Quantico.

On July 25, 1952 he entered the US Army. He served in the Korean Conflict and received the Good Conduct, National Defense Service, and Korean Service Medals. He was honorably discharged as a Staff Sergeant on July 24, 1958.

On July 12, 1953 John married Sally A. Washburn at Our Lady of the Sacred Heart Church with Rev. Benoit Dostie officiating.

While he was serving his country, the couple lived in Texas before returning to Watertown. For 27 years he was a Watertown Police Officer, serving as Chief, and retired in 1987. John also worked on Ft. Drum in law enforcement in a civilian capacity. The couple moved to Clayton from 1971 to 1986 and then returned to Watertown. In 2004 they moved to Myrtle Beach, SC and returned to the Watertown and Sackets Harbor area in 2016.

John was a former member of the Clayton Lions Club and Kang Duk Wan. He enjoyed golfing, painting, and sitting in the sun at the lake having a smoke. He was of the Catholic faith.

His family will receive friends at Cummings Funeral Service, Inc., Watertown on Saturday, December 12, from 1 - 2 PM with masks and social distancing required for entry. The funeral service and burial will be private. Online condolences to John's family may be posted at www.cummingsfuneral.com. In lieu of flowers, donations in his name may be made to Credo Foundation, 595 W. Main St., Watertown, NY 13601. In memo portion of check write: In memory of Travis Rogers, RRSY.