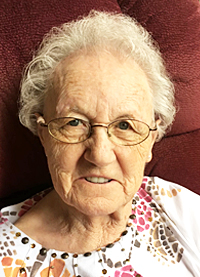 Born Oct. 7, 1927, in Bay Shore, she was a daughter of William and Caroline Dvorak Vrana, who were first-generation immigrants from what was then Czechoslovakia. She attended East Islip schools, graduating in 1945. She continued her education at the Central Islip State Hospital School of Nursing and became a registered nurse in 1948.

She married Charles L. Schindler on Oct. 1, 1949, at St. Mark's Episcopal Church, Islip. Frances was employed for a time at Southside Hospital, Bay Shore, where she worked mainly as an operating-room nurse. She took great pride in her home and family and supported and worked with her husband in the flower business that he had established with his brother. She was a member of St. Ann's Episcopal Church, Sayville, where she was also an active volunteer.

After residing in Sayville for most of their married life, Charles and Frances moved to Watertown, where Frances became a communicant of both St. Paul's and Trinity Episcopal churches. They were married for 62 years until his death Jan. 11, 2012.

Besides her husband, four sisters and a brother died before her.

A graveside service at St. Ann's Cemetery, Sayville, will be in spring at a time to be announced. Arrangements are with Cummings Funeral Service Inc., Watertown. Online condolences may be posted at www.cummingsfuneral.com. In place of flowers, donations in Frances's name may be made to St. Ann's Church, 257 Middle Road, Sayville, N.Y. 11782.