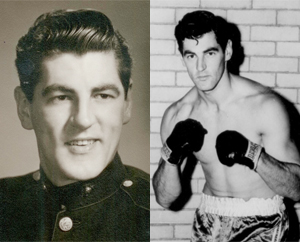 Earl W. Cole was born January 2, 1931 in Watertown, son of the late John and Gladys (Lyon) Cole. His three brothers, Ed, Bob, and Jack, predeceased him and his sister, Florence Lyng, currently lives in Pulaski. He grew up on the North Side and graduated from Watertown High School in 1949. He had captained the boxing team and played football.

Earl enlisted in the US Marine Corps in November 1950 and was honorably discharged in November 1953. His duty stations were Paris Island, Camp Lejuene, Camp Pendleton, Korea, and Anacostia in Washington DC. He was awarded the Korean Service Medal with three stars, United Nations Service Medal, National Defense Service Medal, and Good Conduct Medal.

He was married for 65 years to his wife, Linda L. Capum Cole, until her death. The couple had two sons, John (deceased) and Mike and two grandsons, Mike and Benjamin (deceased). He was a loving husband, father, and grandfather.

Earl retired from Metropolitan Life Insurance Co. after 27 years. He retired again as president of Frontenac Crystal Spring Water Co. in July 1994. He was a member of Clayton American Legion Colon-Couch Post 821 and a life member of Marine Corps League. He played seven years semi-pro football for the Watertown Red and Black. Earl also played city league softball and basketball, was an amateur boxer, and enjoyed golf. He was very athletic.

He was past president and long time member of Clayton Lions Club and past president of both Clayton Minor Hockey Assoc. and Jefferson County Chamber of Commerce. Earl was chairman of Clayton Youth Commission for 13 years and coached youth football, baseball, and hockey. He was a true community leader and builder.

His wife, Linda, passed on February 21, 2020 and Earl passed on March 20, 2020. There will be a joint graveside service for Earl W. and Linda A. Cole on Saturday, October 10, at 10 AM at the Clayton Cemetery. Masks and social distancing are required for attendance. Military honors for Earl will be provided by American Legion Post 821. A celebration of their lives will be at a time and date to be announced.

Arrangements are entrusted with Cummings Funeral Service, Inc., Clayton. Online condolences to their family may be posted at www.cummingsfuneral.com.