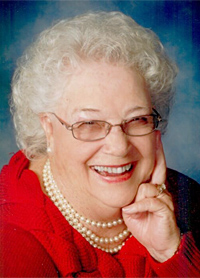 Joan was born in Binghamton on September 2, 1939, daughter of Gerald F. and Doris A. Woodmansee Russell. The family moved to the north country and she was a 1958 graduate of LaFargeville Central School and Central City Business Institute, Syracuse where she majored in business administration.

Joan was employed by Carl Fry's Farm Implements, Talcott Falls and as a buyer for McCurdy's Department Store, Rochester. With her husband, she co-owned and operated the Driftwood Restaurant, Clayton from 1970 to 1975 and she owned and operated Whippoorwill Gift Shop from 1994 to 2001. She was financial secretary for the Depauville United Methodist Church, a trustee for the Northern NY Agricultural Historical Society and Museum, and a member of the Order of the Eastern Star, Depauville. The couple spent winters in Winter Haven, FL where she was a member and receptionist at the First Presbyterian Church, Haines City, FL. Joan enjoyed cooking, decorating for different seasons, reading, and playing cards.

Services will be held at her family's convenience. Arrangements are entrusted with Cummings Funeral Service, Inc., Clayton and online condolences may be posted at www.cummingsfuneral.com. Donations in Joan's name may be made to a charity of your choice.