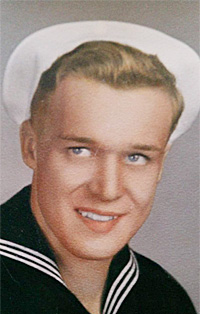 Ed was born in Watertown on April 22, 1926, son of Dr. William W. Hall Sr. and Elsie Rogers Hall. He was a graduate of Watertown High School and Simmons School of Embalming, Syracuse.

On April 13, 1944 he entered the US Navy. He received the American Theater Ribbon and the World War II Victory Medal. He was honorably discharged at a Hospital Apprentice 2nd Class on June 19, 1946.

Ed worked for Strathmore Paints, Syracuse. He was a Licensed Funeral Director for over 50 years, working for Cummings Funeral Service, Inc. and was a trade man throughout the area. In 1967 he purchased the St. Lawrence Motor Lodge, Clayton operating it with Gladys for over 35 years. Ed also ran the St. Lawrence Shoppe, Clayton and Cape Vincent, specializing in stripping and refinishing furniture, for 60 years.

He was a former member of the Clayton Methodist Church. Ed was a founding member and Lions Roar performer of the Clayton Lions Club. He was also a member of the Clayton American Legion Colon-Couch Post 821 and the NYS Funeral Director's Association. Gladys and Ed wintered in Florida for 25 years where he was a member of the Harmonicats and Moose Lodge 2267, Lauderdale Lakes. He enjoyed fishing, boating, cooking, and loved playing the harmonica wherever he could. After he and his wife sold the motel, they moved to their river estate at the Hall O Fame Compound.

Ed is survived by his son Mark E. Hall, Tamarac, FL; daughter Mary Ann Hall, Cape Vincent; two grandchildren, Jonathan Hall and wife Ryan, Tyler, TX and Sarah Hall, Ft. Lauderdale, FL; two twin great-grandchildren on the way; and numerous nieces, nephews, cousins, and those who wanted to be family. Along with his wife, Gladys, Ed was predeceased by his two brothers and their wives, Wendell and Janet Hall, Dr. William W. and Carol Hall, Jr., and his sister and her husband Suzanne and Robert Crysler.

Services will be held at the convenience of his family at a time and place to be announced. Cummings Funeral Service, Inc., Clayton is proud to be entrusted with our friend's arrangements. In lieu of flowers donations in his name may be made to Hospice of Jefferson County, 1398 Gotham St., Watertown, NY 13601.