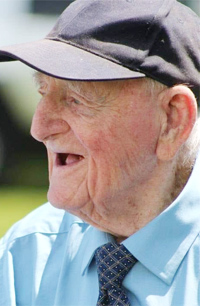 He was born in Clayton on May 24, 1922, son of John E. and Ida May (Orvis) Solar, Sr. and he graduated from Clayton High School in 1941. On October 31, 1942 he entered the US Army, serving with the 825th Engineer Aviation Battalion. Charles received the European African Middle Eastern Service, Good Conduct, and World War II Victory Medals and was honorably discharged on December 31, 1945 as a Corporal.

Before his service to his country, he was a truck driver for Cowers Motor Express. After his service Charles was a pick up and delivery driver for NY Central Railway Express and then in 1960 worked for Lou Leonard Plumbing and Heating.

Charles loved his native village. In 1965 he began working for the village of Clayton. He retired in 1984 as the Superintendent of the Village of Clayton Department of Public Works. He had served as the town constable, as a village trustee for seven years, and was the village crossing guard after his retirement until June 2011. He also was on the Clayton Cemetery board for many years. Charles was honored to be the first Citizen of the Year in Clayton in 1970 and in 2011, he was named honorary dock master in recognition of his dedicated and outstanding service to the Clayton community.

Charles served in the Clayton Fire Department since April 7, 1941. He served as president, vice president and chief.

He was a member and past trustee of the Clayton United Methodist Church. Charles was a member of Clayton American Legion Colon-Couch Post 821 and was an Independent Order of Odd Fellows Lodge 328 member since 1941. He enjoyed gardening and wood working.

In addition to his loving wife, he was predeceased by his daughter-in-law Cheryl Solar, his four brothers, Walter H., Wallace A., Richard L., and John E. Jr., and his three sisters, Annette D. Badour, Rose Johnston, and Mabel Solar.

Calling hours for Charles will be held at the Clayton Fire Department, 855 Graves St., Clayton on Saturday, August 8, from noon to 4:00 PM. Masks and social distancing are required. The funeral service will be at the fire department on Sunday, August 9, at 1:00 PM with Pastor Earl LaLone, Clayton United Methodist Church, presiding followed by burial in Clayton Cemetery. Arrangements are entrusted with Cummings Funeral Service, Inc., Clayton and online condolences to his family may be posted at www.cummingsfuneral.com. In lieu of flowers, donations in Charles' name may be made to the Clayton Cemetery Association, c/o Bruce Cerow, 221 John St., Clayton, NY 13624.

12
#20 Leonard and Debra 2020-08-04 09:10
So sorry for your loss. From what I have heard from Bob and Sandy it sounds like he was a very special man. I’m sorry I never got to meet him. Prayers for strength, comfort and peace for the family. May you feel the presense of God during this difficult time.
Report to administrator
#19 Lou/Rosie Montante 2020-08-04 08:05
Sorry to hear of Charlie's passing. He will be remembered for his helpfulness and generosity. Our condolence.
Report to administrator
#18 Clarke 2020-08-04 00:10
Rich & I send our sincere condolences to all of Charlie’s family & friends and wish him a most peaceful journey to the other comforting side - he is well deserving.