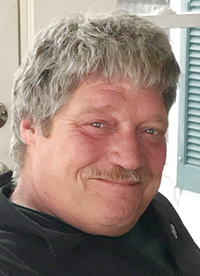 Flipper was born in Syracuse on March 1, 1962, son of Maurice and Joan (Sweeney) Axenfeld and he was a graduate of Fayetteville-Manlius High School. For over thirty years he worked for Brosh Mechanical Inc., Liverpool. Recently he had started his own catering business, “Flipper's Fine Foods.”

When Flipper was young, he would travel the neighborhood flipping coins, asking "Heads or Tails?,” from then on, he was known as Flipper. He was an avid downhill skier, enjoyed snowmobiling, riding his Harley, the St. Lawrence River and the Buffalo Bills. He was a passionate chef who immensely enjoyed feeding his family and friends.

A private funeral Mass will be celebrated at St. Cecilia's Church, Adams. His family will have a celebration of his life at a later date. Arrangements are entrusted with Cummings Funeral Service, Inc., Watertown and online condolences to Flipper's family may be posted at at www.cummingsfuneral.com. In lieu of flowers donations in his name may be made to the American Cancer Society, PO Box 7, E. Syracuse, NY 13057.