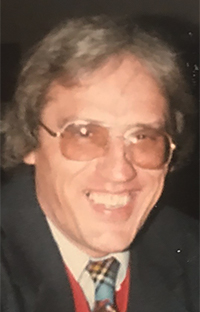 Obie was born in Theresa on November 15, 1940, son of Gordon L. and Marion Langois O'Brien. He was a graduate of Clayton High School and attended JCC for two years. A marriage to Sheila Cipullo ended in divorce.

For 23 years he was the bar manager at O'Brien's Hotel. He also was the caretaker for the Custis family on Grindstone Island for 45 years. Obie was a communicant of St. Mary's Church and was in charge of St. Mary's Basketball for two years, winning a Watertown City Championship. He ran the girl's basketball program in Clayton for 25 years, Clayton Minor Hockey for 14 years, and the Clayton Youth Commission for four years. Obie was selected Clayton’s Citizen of the Year in 2003. Obie was one of the founding members of the Maverick Ski Club in Clayton, NY, and an devoted LA Dodgers fan.

Obie AKA "Hey Man" was loved by his family and community. He always had a kind word and smile for everyone he met. His dedication to the youth will be remembered by many. Whether it was a dollar bill, a pair of hockey skates or a bicycle to a kid who did not have one, he made his mark and will be missed by all.

A memorial mass will be held at St. Mary's Church at a time and date to be announced. Burial in St. Mary's Cemetery will be at his family's convenience. Arrangements are entrusted with Cummings Funeral Service, Inc., Clayton and online condolences to his family may be posted at www.cummingsfuneral.com. In lieu of flowers, donations in Leonard's name may be made to the Clayton Youth Commission, P. O. Box 191, Clayton, NY 13624.