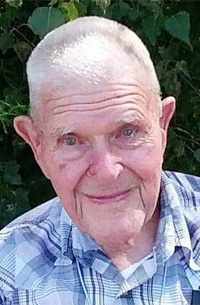 Bill was born in Ossining, NY on April 4, 1921, son of William C. and Helen Doane Platt. He graduated with his Engineering degree from Clarkson University. He married Jacqueline Aureli in October 1950 and she died in 1987. Bill then married Shirley I. Adams on June 20, 1994 and she died on December 30, 2017.

He was the owner and operator of Plattel Television Repair, Manasquan, NJ. He was a former member of Arch Street Methodist Church, Philadelphia, PA and the Manasquan Methodist Church. In 1991 Bill moved to Clayton and he was a member of East Line Assembly Church, Clayton. He came from a long line of sea captains, had built his own sailboat, and enjoyed spending time at the St. Lawrence River. Bill also enjoyed reading and biking. When he was 72 years old, he biked from California to Florida.

Along with his two wives, Bill was predeceased by his sister Elaine Losey.

Burial in Grove Cemetery, LaFargeville will be held Friday, July 24, at 11 AM. Arrangements are entrusted with Cummings Funeral Service, Inc., Clayton and online condolences may be posted at www.cummingsfuneral.com.

In lieu of flowers, donations in his name may be made to Hospice of Jefferson County, 1398 Gotham St., Watertown, NY 13601.