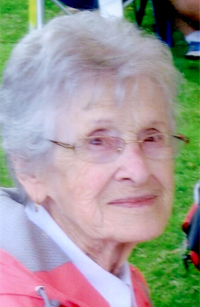 Veronica A. Bogenschutz, 99, died Friday May 15, 2020 at the Samaritan Summit Village, Watertown, where she had resided since the spring of 2016. She was formerly of Brooks Drive in Clayton. Veronica was born at Strickland Corners, in the Town of Philadelphia, N.Y. a daughter of Raymond J. and Lucy Marcott Gates. She attended Strickland Corners school and when her family moved to Carthage, she graduated from Carthage High School in 1939.

Veronica married Thomas M. Bogenschutz, Sr. on July 4th, 1941 at St. Mary's Catholic Church, Sterlingville, N. Y. with Rev. Albert O'Brien officiating. The couple were the last people to be married in that church as the whole town was torn down for Ft. Drum expansion. Tom, a Design and Development Engineer died on December 25, 2012 after 71 years of marriage. Veronica was a homemaker raising her eight children. She was a communicant of St. Mary's Church, Clayton and St. Vincent DePaul Church, Rosiere. She had been a former member of the Weedsport Garden Club, winning ribbons for her flowers. A member of the Knitwits, Clayton, she also greatly enjoyed cooking, baking, gardening, crafts, sewing and spending time with five generations of her loving family.

A Memorial Mass will be held at St. Mary's Church, Clayton, New York at a date and time to be announced, there will be no calling hours, and the burial will be held at the convenience of the family at St. Mary's Cemetery, Clayton. In lieu of flowers the family requests donations may be made to the Association for the Blind & Visually Impaired of Jefferson Co., Inc. 131 Washington St., Suite 300, 3rd Floor, Hospice of Jefferson County, 1398 Gotham Street, or Summit Village Activities Fund, 22691 Campus Dr., all in Watertown, N. Y. 13601. The family wishes to express their gratitude to the entire staff at Samaritan Summit Village for the care given to Veronica. Arrangements are entrusted with Cummings Funeral Service, Inc. and online condolences to her family may be posted at www.cummingsfuneral.com.