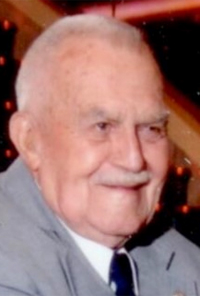 Lewis was born November 21, 1932 at his grandmother's house on Merrick St., Clayton, son of the late Annette Solar Badour and Arthur L. Badour. He attended Fisher's Landing Primary School, graduated from Clayton High School, and then from Oswego State College with a degree in Education. He served with the US Army in the 2nd Infantry Division in Korea, receiving two Korean Service Medals (one with a bronze service star), Combat Infantry Badge, National Defense Service Medal, two Overseas Bars,the Silver Cross, and the NYS Conspicuous Service Medal.

Lewis married Joyce Garnsey on November 22, 1952 at St. Mary's Church. He and Joyce owned and operated Dan's Cottages since 1953. Joyce passed on June 10, 2007 after 56 years of marriage. He married Sheila Hasner on October 3, 2009 at Depauville Methodist Church.

Lewis was a 60 year member of the Grand Lodge of Free and Accepted Masons. He was a charter member of the Fisher's Landing Racing Club and was Northeastern Divisional Champion for Class-A Runabout Boats in 1951. Lewis was High Point Champion in Go-Carts at both Alexandria Bay and Clayton Race Tracks. He was Inspector for the American Power Boat Association as well as Chief Inspector at Can-Am Speedway for 23 years. Racing was his passion!

He was a member of Clayton American Legion Colon-Couch Post 821 and Clayton Chamber of Commerce. He was an exempt member of the Clayton Volunteer Fire Department and Clayton Lions Club. Lewis served on the Village Board for 17 years and was Deputy Mayor under several Mayors. He taught the Snowmobile Safety Course for several years and also was a Cub Scout Leader. His favorite hobby was working in his workshop and he made numerous furniture pieces for his family and friends. Lewis enjoyed traveling, Casinos, and spending time with his family and friends.

Burial in St. Lawrence Cemetery, town of Cape Vincent will be at his family's convenience. A celebration of his life will take place at a time and date to be announced.

Arrangements are entrusted with Cummings Funeral Service, Inc. and online condolences may be posted at www.cummingsfuneral.com.