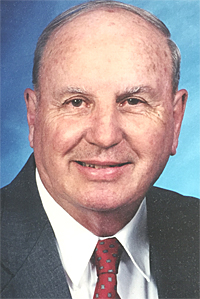 Al was born in Watertown on May 25, 1931, son of the late Herbert L. and Doris E. Quinn Smith. He graduated from Watertown High School in 1949 and received his Bachelor's degree from Cornell University in 1954 in Agricultural Finance. He married Martha M. "Marty" Maine in Carthage on April 23, 1955. After his marriage he served for two years in the US Army as a 1st Lieutenant.

Al began his career with the National Bank of Northern NY, now Key Bank, in May 1957. He retired on February 1, 1991 as President of the Northern Region, where he was responsible for 31 offices in several counties. He served as chairman and a member at large for the NYS Bankers Assoc.

Throughout his career, he received many awards, of which he was very proud. Some included a Watertown Honorary First Citizen Award from Mayor William Lachenauer in 1963 and again from Mayor Theodore Rand in 1974, a North Country Citation from St. Lawrence University in 1991, a Greater Watertown Chamber of Commerce "Citizen of the Year Award" in 1993, and the Israel A. Shapiro Award in 1992.

Al was a charter member of Little Kildare, Inc. on Carry Falls in the Adirondack Park where he enjoyed spending time hunting, fishing, and boating with family and friends.

He was very civic minded and showed his love and commitment to the community and environment through active participation and holding officer positions in numerous organizations/boards in the Watertown and Massena areas. These included chambers of commerce, Rotary and Kiwanis clubs, AUSA, JCIDA, WPBS, ANCA, and NY Fish and Wildlife Management and Minna Anthony Common Nature Center.

Calling hours will be held at Cummings Funeral Service, Inc., Watertown on Wednesday, February 26, from 4 - 7 PM. A prayer service will be held at the funeral home on Thursday, February 27, at 9:15 AM followed by the funeral mass celebrated at St. Patrick's Church at 10 AM with Fr. Christopher Looby, pastor, presiding. Burial will be in Glenwood Cemetery immediately following.

In lieu of flowers, donations in Al's name may be made to St. Patrick's Church, 123 S. Massey St., the NNY Community Foundation, 131 Washington St., or JCC Foundation, attn. Martha Smith and Anne Chase Maine Nursing Scholarship, 1220 Coffeen St., all in Watertown, NY 13601. Online condolences to his family may be posted at www.cummingsfuneral.com.