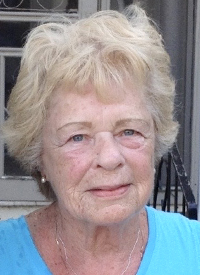 Mimi grew up in Watertown, NY and attended Watertown High School. She later attended the Rochester Institute of Technology in Rochester, NY where she graduated in 1949 with a four-year degree in Business Administration/Retail Management. During college, Mimi was a member of Phi Upsilon Phi sorority. After college, Mimi worked as a sales representative and a model for McCurdy's Department Store in Rochester. Mimi moved back to Watertown where she was employed in business telephone administration by NY Telephone Company in Watertown.

Mimi was a Cub Scout Mother for all three of her sons. For several years, Mimi volunteered at the House of the Good Samaritan Hospital in Watertown. She served as a member of the board for the Thousand Island Park library, the House of the Good Samaritan Auxiliary, and the Watertown Community Concert Association. She also sang with the Watertown Male Chorus, and belonged to a hospital auxiliary Twig. Mimi enjoyed her family, endless days on the St. Lawrence River in the 1000 Islands, reading, music, tennis, downhill and cross country skiing. Mimi and Frederic also enjoyed spending time at their Thousand Island Park cottage and Hilton Head Island, South Carolina. The Kendalls held memberships at the Ives Hill Golf and Country Club, Black River Valley Club, and the Watertown Health and Racquet Club.

Most of all, Mimi was a very kind person who warmed many people's hearts. Her smile was contagious and her quiet wisdom was very strong and apparent to those who knew her.

Calling hours will be held from 4 to 6 pm on Friday, February 7th at Cummings Funeral Service, Inc. 214 Sterling St. Watertown, NY 13601. The Funeral will be at Holy Family Church at 11 am on Saturday, February 8th. The family plans to have a private burial ceremony in May on Wellesley Island, NY.