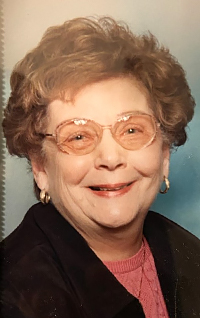 Patricia A. Castro, widow of Joseph Castro, passed away with her family by her side on January 15, 2020. Patricia was born on September 23, 1930, the daughter of Francis (Sam) and Katherine Warren Burns in Watertown, NY. She graduated from Immaculate Heart Academy in 1948 and following graduation, she worked at the NY Telephone Company for several years as an operator.

On September 30, 1950, Patricia married Joseph Castro in St. Patrick's Church, Watertown, a union that lasted 42 years until Mr. Castro passed away in March 1993 after a courageous 6 year battle with cancer. Patricia left the phone company to raise her family and for over 40 years, she worked along side her husband to run the family business, Castro's Florist and Greenhouses in Watertown until their retirement. Summers were spent with the family at their cottage on Sherwins Bay built by her husband in the mid-fifties. Many good memories were made there with the family over the years.

Patricia enjoyed spending time with her family. Together with her husband she traveled extensively to many foreign countries over the years. After retirement, Pat and Joe spent the cold winter months in Florida. With her friends, she enjoyed going to the casino, playing cards and watching a variety of sporting events. She also enjoyed numerous bus trips with her friends to a variety of places. In 2000, Pat moved to Rome, NY to be closer to her daughters. She was active in the Senior Center in Rome and developed close friendships in her new hometown.

Services for Patricia are entrusted with Cummings Funeral Service, Inc., Watertown. There will be no calling hours per her request. Burial will be in Glenwood Cemetery beside her husband Joseph following a private prayer service at the funeral home. Donations may be made to Hospice of Jefferson County, 1398 Gotham St. or Sisters of the Precious Blood, 400 Pratt St., both in Watertown, NY 13601. Online condolences to her family may be posted at www.cummingsfuneral.com.