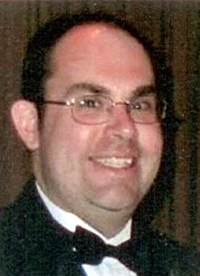 Chris, son of David and Jean Kenney of Clayton, was born on October 20, 1973 and was a 1992 graduate of Thousand Islands Central School. He earned a Bachelor of Arts Degree in History and Music from St. Lawrence University and a Master of Arts in History Museum Studies from the Cooperstown Graduate Program. He married Kimberly Beach in her hometown of Rome, NY on September 2, 2000.

In 2001 he became Director of Education at the McKinley Presidential Library and Museum in Canton, Ohio.

Chris had many interests: Open hearth cooking and antique cars led to fundraisers for the museum. He was a gifted pianist and earned his private pilots license at an early age. Chris enjoyed taking his 1969 Oldsmobile Convertible 442 or his 1951 Chevy truck - Matilda - to car shows.

Never losing his love of the river, Chris spent part of his vacation each year at the St. Lawrence River. Whether boating or just sitting on the porch of the family cottage at Arcadia Park, he said this was the only place where he could truly relax.

Chris was the author of 3 books about President McKinley, the monument and the museum. He recently completed an article for White House History, the journal of the White House Historical Association. As Director of Education he organized and gave tours of the museum and monument. School groups made up the bulk of the tours. Chris also presented programs in Canton and surrounding areas. He represented the museum at local and state organizations and received state recognition for some of his programs.

Besides his parents, Chris is survived by his wife Kimberly, Canton, Ohio and his sister and brother-in-law, Heather and Brian Huntley and their children Olivia, Parker, Mikenna, and Carson of Potsdam, New York.

A celebration of life was held December 29 at the museum. Contributions in his name may be made to McKinley Museum and National Memorial, attention Christopher J. Kenney Memorial Bus Scholarship Fund, 800 McKinley Monument Dr. NW, Canton, OH 44708-4800. This grant will provide funds to schools that can't afford field trip busing. Or contribute to a charity of your choice. Local online condolences may be posted at www.cummingsfuneral.com.

#10 Eleanor Jeffries 2020-01-11 21:40
Dearest Jean, David, Heather and Kim Kenney,
I was not informed of Chris's passing until yesterday. I am so saddened by the news. My memories are all from his boyhood days at Aunt Grace's. Gary, Chris & Heather being typical River Rats. He turned out to be a fine and accomplished man. He has a left a great legacy. Extending condolence's on behalf oy myself, Gary and Craig Jeffries. May the Soul of our faithful departed, Rest in Peace. Amen!
Report to administrator
#9 Valerie Sestir 2020-01-08 14:17
David and Jean and family...

I was saddened and shocked to hear of Chris' passing. I hope you know that my thoughts and deepest condolences and so many hugs are with you all. Such a loss...

Love to you all,
Valerie and Frank
Report to administrator
#8 Deborah Timerman 2020-01-08 08:37
Jean & David,
My deepest sympathy on the loss of your son Chris. He was an impressive young man.

Deborah Timerman
Report to administrator
#7 David Harrington 2020-01-07 13:22
David and Jean, I was so sad to hear about Chris. He was such a great person and one of my Moms very favorite students. The Harrington Family sends is most loving thoughts and prayers to you and your Family.
Report to administrator
#6 Rebecca Wallo-Rose 2020-01-07 09:23
Dear Mr. & Mrs. Kenney, Kim, Heather, & Family.
There are truly not enough words for me to express my sadness about Chris's passing.
I have so many wonderful memories of Chris from high school; being in plays together, Whiz Quiz, One Act Plays, and all the music we shared studying with Mrs. Northrop.
I feel the most important and cherished memory I have of Chris is his kindness to everyone around him. Chris was always kind. His smile lit up a room, and he had a unique gift of making everyone feel included. While he didn't always have a lot to say, Chris added so much just by being present in our group of Band/Music friends.
I know he went on to do wonderful things in his career, and I am so sorry that he is gone way too soon.
Please accept my deepest condolences on your loss, Chris will be incredibly missed.
Becky Wallo-Rose
Report to administrator
#5 Deborah Phinney 2020-01-06 12:12
My condolences on the death of your son. May your memories bring you peace.
Deborah Phinney
Report to administrator
#4 Steve Yazell 2020-01-05 09:53
Dear Mr. and Mrs, Kenney,
My heartfelt condolences to you and your family on the loss of your son. What an extraordinary man.
Report to administrator
#3 Georgeen Clarke 2020-01-05 08:59
Mr. & Mrs. Kenney, Kimberly Kenney, Heather Kenney Huntley & Family ...
My heartfelt sympathy goes out to you all. Sadly an unfortunate short life but Chris’s exceptional contributions to the world around him is a wonderful tribute to his memory.
Georgeen Marshall Clarke
Report to administrator
#2 Robin Brand 2020-01-04 16:00
Dear Jean, David, Heather and family,

I was shocked and saddened to hear of Christopher’s passing today. Please accept my most sincere condolences. I know he was very loved and will be greatly missed. I hold you all in my heart as you deal with this immense loss.