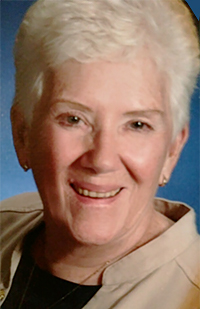 Nancy was born on December 28, 1939 in St. Johnsbury, Vermont to Bernie and Blanche (Hudson) Wing. She graduated in 1958 from Brighton High School in Island Pond, Vermont.

Nancy married George Albert Hinerth on August 26, 1961 in Island Pond, Vermont and the newlyweds moved to Chateaugay, New York shortly after. In 1968 they settled down in Clayton, New York to raise their family.

Nancy worked at the Mountain View House in Whitefield New Hampshire and F. J. Preston & Sons in Burlington, Vermont. After working 25 years at Key Bank, Nancy retired in 1999 as assistant vice president. She was actively involved with Clayton Knights of Columbus Women’s Auxiliary, Clayton Improvement Association, the Clayton Opera House, and St. Mary’s Church. She loved winning Bingo and her homemade quilts can be found on loved ones’ beds. She also enjoyed her US and World travels to Canada, England, Germany, Italy, Egypt and New Zealand.

A mass to honor and celebrate Nancy will be held on a later date in Clayton, New York. Donations may be made in her memory to St. Mary’s Church at 521 James Street, Clayton, New York 13624. Local arrangements are with Cummings Funeral Service, Inc., Clayton. Online condolences to her family may be posted at www.cummingsfuneral.com.