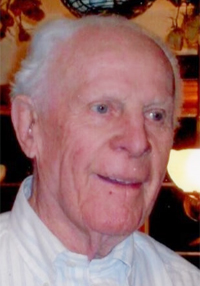 Jim was born in Oneonta on April 16, 1927, son of the late J. Searle and Virginia (Woolheater) Powers. The family moved to Lowville when he was young and he graduated from Lowville Academy. He entered the US Army on May 16, 1945 and was honorably discharged on November 9, 1946. He then went to Ithaca College and received his Bachelors Degree in Physical Education.

In 1957, Jim began his career at Sackets Harbor Central School where he was a physical education teacher, coach, and Athletic Director until his retirement in 1984. He coached football, track, basketball, and baseball. Some of his many accomplishments with his teams were the Section D. basketball championship in 1959 and the Frontier League track championship in 1965. His record in football was 124-65 during his tenure, winning championships in 1964, 1965 (undefeated season), 1972, and 1974 (winning against his Alma Mater, Lowville, for the championship). As a former student and player described him, Jim taught his players to be fundamentally respectful of their talents, embrace any opportunity to be excellent, and to play hard until the last whistle blows.

Jim was an offensive coach, then head coach for the Watertown Red & Black. In 1980, he was named Sporting News National Co-Coach of the Year for Semi-Pro Football, won the EFL championship and was ranked # 2 in the country. In 1996 he was inducted in the Red & Black Hall of Fame. He still enjoyed the monthly luncheons with his fellow Red & Black colleagues. He received the Citizen of the Year award from Sackets Harbor and was inducted in the Sackets Harbor Hall of Fame in 2018. With his wife, Ellen, they coordinated the landscaping and floral arrangements throughout the village for several years. He also helped her run her antique business, Main-ly Antiques. He enjoyed following his wife as she led the Sackets Harbor Sentinels Marching Band wherever they played, which included Washington DC for the Cherry Blossom Festival, Disney World, and the Gator Bowl.

Jim enjoyed playing golf, watching horse races, and was a huge SU basketball fan. He was a communicant of St. Andrew's Church.

He is survived by his son, Gary (Cindy) Powers and their daughter, Fayetteville; daughters, Kathy Harrigan and her two daughters, Dewitt, Julie (Dennis) Jackson and their two sons, Carthage, and Cheryl (Steve) Hillyard, and their two daughters and two sons, Franklin, NC. He is also survived by brother Edward (Rosalie) Powers, Greenfield Center; and several nieces and nephews. Besides his wife, Jim was predeceased by his sister, Vesta Andre.

His family would very much like to thank all Jim's friends and neighbors for their care and devotion, keeping him engaged with his community, and watching out for him.

Calling hours will be held at Cummings Funeral Service, Inc., Watertown on Friday, November 8, from 4 - 6 PM. The funeral mass will be celebrated on Saturday, November 9, at 1 PM at St. Andrew's Church, Sackets Harbor with Rev. William G. Muench presiding with burial in Lowville Rural Cemetery following.

In lieu of flowers, donations may be made to your local Meals on Wheels or food pantry. Jim had great compassion for those who were suffering or in need. In keeping that legacy alive, help someone less fortunate than yourself. Online condolences to his family may be posted at www.cummingsfuneral.com.