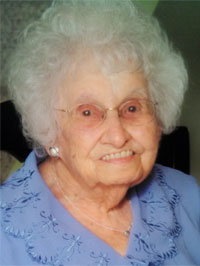 Calling hours will be held at Cummings Funeral Service, Inc., Watertown on Saturday, April 13, from 9:30 - 11:30AM followed by the funeral service at the funeral home at noon with Rev. Steven Murray, Holy Family Church, officiating. Burial will be in North Watertown Cemetery.

Mrs. Pipe was born in Watertown on March 28, 1910, daughter of Fred and Cora Eddy Snell, and she graduated from Watertown High School in 1928.

For five years Irene was a long distance operator for NY Telephone Co. and for nine years she was a clerk in the receiving department at Empsall's Department Store, both in Watertown . She was a member of Stone Presbyterian Church and the Fidalias Club. She was a past Brownie Leader, and she enjoyed gardening, reading, knitting and spending time on the River and Lake . It is remarkable that Irene lived in her own home and lived to 103 years independently. Irene's proudest accomplishment in her long life was her loving family. She always did things her way.

Donations in her name may be made to the National Niemann-Pick Disease Foundation, PO Box 310 , Fort Atkinson , WI 53538 . Online condolences to the family may be made at www.cummingsfuneral.com.