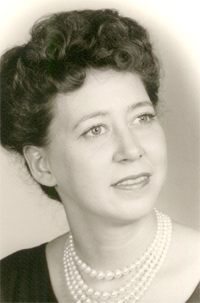 A calling hour will be held at Cummings Funeral Service, Inc., Watertown on Monday, October 7, from 9:30 - 10:30 AM followed by the funeral service at 11:00 AM with Rev. Dominic J. Kriegbaum, pastor of New Way Assembly of God, presiding. Burial will be in North Watertown Cemetery.

Marjorie was born in Ottawa, Canada on July 17, 1924, daughter of William J. and C. Gertrude Fyles Baker. The family moved to Watertown and she attended Watertown High School.

Marjorie had been a bookkeeper for Empsall's Department Store and a teller for Marine Midland Bank. She retired as a bookkeeper for Sturtz & Brown Physicians. She enjoyed volunteering at the House of the Good Samaritan, bingo, knitting, travel, and especially tending to her family.

In lieu of flowers donations in her name may be made to Hospice of Jefferson County, 1398 Gotham St., Watertown, NY 13601 or a chairty of your choice. Online condolences to Marjorie's family may be posted at www.cummingsfuneral.com.