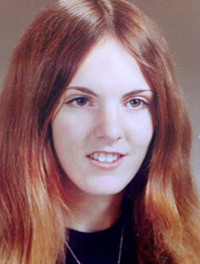 On March 29, 2013, Ms. Catherine Jean Whitton passed away peacefully at her home, surrounded by her family. Calling hours will be held at Cummings Funeral Service, Inc., Clayton on Tuesday, April 2, from 4 - 7 PM. Burial will be held at a later date as the family wishes.

Catherine was born in Gouverneur on August 14, 1956, daughter of the late Barry Wicks and Eleanor Solar (Washburn). A marriage to Darrel Whitton Jr. ended in divorce. Catherine spent the last 25 years with her companion Stan Brill.

Catherine worked for a number of years as manager of BookWorld in Watertown , NY , and later Island News. Catherine later worked as a Florist at Bay Flowers and as a baker for The Harbor Restaurant in Clayton , NY and the Candlelight Inn in Omar. Catherine always said her greatest job was Office Manager at BMS Small Engine, as she was able to work side by side with Stan.

Catherine's interests were sincere and humble, as was she. She spent many hours in her gardens and enjoyed having flowers in every space she could find. She liked watching and feeding the birds. She was an avid seamstress; knitting and sewing, making countless dresses, sweaters, hats and mittens for the children of friends and family. Catherine also made the Victorian costumes for the women of the Friends of the Hawn Memorial Library "Grand Dickens Ball." She was an amazing cook, and made countless pies and desserts. Her greatest love was spending time with her two grandchildren.

Catherine's unique combination of kindness, friendliness and wit touched the lives of her family and friends. She often said how astounded and overwhelming it was that so many people attended a benefit held in her honor. She read and kept every card and letter that was sent to her and knew she was in the thoughts and prayers of many.

Catherine is predeceased by her father, Barry Wicks, step father John E. Solar, and a brother in law, Robert Hunter. Though she loved them, Catherine would wish no flowers. Contributions may be sent in remembrance of Catherine's life to Hospice of Jefferson County, 1398 Gotham St., Watertown, NY 13601.