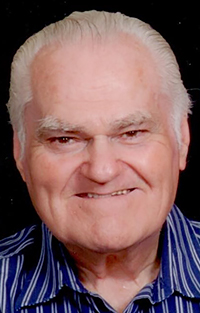 Barrie J. (BJ) Hughes, 82, of Watertown, NY passed away peacefully on Sunday, July 14, 2019, at Samaritan Summit Village, Watertown. He is survived by his beloved wife of 58 years, Clemeth (May) Hughes; sons Randy J. (Carol), Watertown and Richard B. (Marnie) Croghan, NY; granddaughters Casey and Carley Hughes, Natalie Hughes, and step grandson Cameron Boliver; and a niece and seven nephews in Alberta and British Columbia, Canada. He was predeceased by his parents, James and Marion Hughes, Calgary, Alberta; daughter Lyndall P. Hughes, who died in 1982; brothers Bert and Leonard Hughes; and sister Doreen McBride.

BJ was born in Calgary on July 15, 1936. He was raised there and became a newspaper carrier which led to a 35-year career in newspaper circulation at papers in Canada and the United States. In 1988 he was the recipient of the J. Truman Kahler Distinguished Service Award under the auspices of the New York State Circulation Management Association Inc. In 1983 he was president of that organization.

BJ, as he preferred to be called, was instrumental in organizing the first restoration campaign for the world's oldest known newsboy statue in Great Barrington, MA, was family historian for his maternal Doherty family, and since 1975 had been involved in organizing several family reunions around the western parts of Canada and the United States. As a piano player, since 1996 BJ entertained seniors, whom he liked to refer to as "recycled teenagers" in over 200 nursing, long term and extended care, retirement and assisted living facilities in Eastern Ontario, Upstate New York, and in Central Florida.

Calling hours will be held at Cummings Funeral Service, Inc., 214 Sterling St., Watertown, NY on Thursday, July 18, from 5 - 7 PM. The funeral service will be at Emmanuel Congregational Church on Friday, July 19, at 11 AM with Rev. Jane Wagner presiding.

No flowers please: memorial donations may be made in his name to The Great Barrington Historical Society, PO Box 1106, Great Barrington, MA 01230 with the stipulation that the donation be put into the Newsboy Restoration Fund or a charity of one's choice. Online condolences to BJ's family may be posted at www.cummingsfuneral.com.