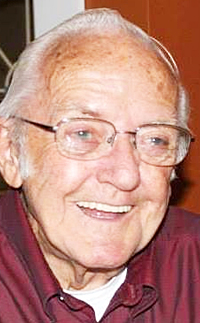 Eugene A. Howard, 90, of Clayton passed away at Riverledge Health Care and Rehab, Ogdensburg where he had resided for three years.

Calling hours will be held at Cummings Funeral Service, Inc., Clayton on Tuesday, July 16, from 4 - 7 PM. There is no funeral service and burial in North Watertown Cemetery with military honors will be at the convenience of his family.

Before moving to Clayton in 1954, Gene worked for New England Electric Co. He then worked for Gray's Wholesale, Clayton as a salesman for 60 years, retiring in 2014. He was a member of American Legion Colon-Couch Post 821 and was a former member of Christ Episcopal Church. He was a member of the NNY Corvette Club, owning a 1995 Corvette. Gene enjoyed NASCAR, dancing, and sports, especially the Patriots, Celtics, Bruins, and Red Sox.

Gene is survived by his two daughters and their husbands, Lugene A. and Robert G. Service, Alexandria Bay and Lohanne T. and Jeffrey E. Messenger, Clayton; three grandchildren, Tricia E. and Paul Beers and Allyson E. Youngs, all of Alexandria Bay and Hayley J. and Michael Ascough, Clayton; six great-grandchildren, Brayden Youngs, Tarryn Pitts, Kamryn and Kaden Beers, and M. J. and Madeleine Ascough; and numerous nieces, nephews, and cousins. Along with his wife, Johanne, he was predeceased by his four brothers, Donald, John, William, and Russell Howard, and his sister, Dorothy Scott.

In lieu of flowers, donations in his name may be made to either the Golden Retriever Rescue of CNY, PO Box 735, Jamesville, NY 13078 or Alzheimer's Assoc. CNY Chapter, 441 W. Kirkpatrick St., Syracuse, NY 13204. Online condolences to Gene's family may be posted at www.cummingsfuneral.com.