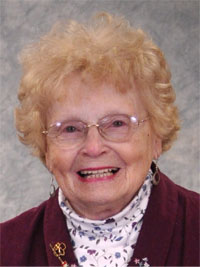 She was born in New York City on May 8, 1928 to Albert S. Gibbs, DDS and Ruth Street Gibbs. She graduated from Onondaga Valley Academy, Syracuse and received her degree in business administration from Jefferson Community College, Watertown in 1977.

In 1959 the couple bought the St. Lawrence Motor Lodge and then built The Castle Dairy Bar. After selling the Lodge, the couple ran the Dairy Bar together for 25 years. She worked from 1971 to 1973 as the assistant manager of The Clayton Empsall's Ladies Wear Store, and also owned and operated The Clay Pot, a ceramics studio, for 15 years.

Esther was a 45 year member of Christ Episcopal Church, St. Hilda's Guild, and was instrumental in the creation of Sunday School at the church. She was a long-time volunteer at the Antique Boat Museum and a member of the Gananoque (Ontario) Curling Club. She enjoyed knitting, traveling, snowmobiling, and especially her grandchildren and great grandchildren.

Esther's life in Syracuse and her eventual life in Clayton had an interesting interconnection. Street Brothers Construction, a family owned business, was one of the major contractors for the construction of the Thousand Islands Bridge. She, along with other members of the Street family, were in the third car that initially crossed the bridge on August 18, 1938, with the President of the United States in one of the cars in front of them.

Besides her husband, Curly, she is survived by her daughters and their husbands, Kathy and Michael Strough, Alexandria Bay and Karla and Lance Peterson, Clayton; her son, Paul Frickman, Orlando, FL; her two grandchildren, Casey Peterson, Geneva and Lance Peterson, Jr., Clayton; her two great grandchildren, Marco Casey and Leigh Casey Palmisano; her sister, Carol S. Conine, MT; her half brother, Albert J. Gibbs and wife, Loretta, AZ; and several nieces and nephews.

A memorial service will be held at Clayton United Methodist Church on Tuesday, March 26, at 3PM with Pastor Donald Briant officiating and burial will be at the convenience of the family in Clayton Cemetery. Arrangements are with Cummings Funeral Service, Inc., Clayton.

In lieu of flowers the family wishes donations in Esther's name to Paynter Senior Citizens Center, Inc., 914 Strawberry Lane, or Clayton United Methodist Church, 324 John St., both in Clayton, NY 13624. Online condolences to the family may be made at www.cummingsfuneral.com.