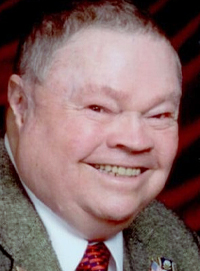 James – formerly of 680 Davidson St. – proudly served his country and community, and his greatest devotion was saved for the love of his life, his wife of 63 years, Janice Anne Traynor, along with their eight sons and large extended family. James and Janice shared a passionate bond, often holding hands throughout the final days before Janice passed away on July 25, 2017.

James was born on Nov. 30, 1933, in Northampton, Mass. to the late J. Albert St. Croix Sr. and mother Ursula McDonald St. Croix. He attended grade school at Holy Family in Watertown and graduated from Immaculate Heart Academy in 1951.

James was a member of the U.S. Navy from 1952-1956 and served aboard the USS Iowa (BB-61) battleship as a veteran of the Korean War and remained a member of the USS Iowa retirees until his passing. He was also a retired U.S. Letter Carrier, working for the U.S. Postal Service from 1961-1989, always delivering a warm greeting and a welcoming hand that held a biscuit for every dog and a tootsie roll for every child along his route.

James later was elected to the Jefferson County Board of Legislators from Jan. 1, 1996-Dec. 31, 2011, representing District 15 in the North West Portion of Watertown. He was the Dean of the Democratic Caucus, Vice Chairman of the Board of Legislators, and filled a variety of other roles throughout his tenure. His efforts helped lead to the Watertown International Airport, the formation of Rand Drive for second-road access to Jefferson Community College, the creation of the county lapel pin, transforming the former Meade St. School for public health use, and the launch of the Fairgrounds Recreational Task Force. He also focused his legislative efforts on areas such as Employee Recognition Insurance, administrative salaries, property sales, and regulating legislator salaries and terms of office.

James also served his community as a member of the North Side Improvement League Board of Directors, CAPC Board of Directors, Veterans of Foreign Wars, Knights of Columbus, American Legion, Boy Scouts of America, and Italian American Club. He was also active in the NALC Postal Union and held several offices during his career at both the local and state level.

James was known to his colleagues, constituents and members of his beloved family alike, for his warm demeanor and kind spirit. He was always willing to listen or provide a piece of wisdom while expecting nothing in return, other than the occasional cold beer.

James was an avid sports fan, especially for Syracuse University and Jim Brown, and traveled the country to support the many athletic endeavors of his sons, grandsons, granddaughters, and great-grandchildren. He started the Post Office Midget League baseball team and was always eager to bring at least a few grand kids along with him and Janice for their annual trip to the NCAA Men's Lacrosse Final Four.

James enjoyed fishing and boating along Lake Ontario for the duration of his life and beamed when sharing stories of his childhood adventures with friend Joey Robillard, tales that grew more colorful each time they were fondly revisited. He and Janice were dedicated parishioners at Sacred Heart Church and convened with their family for brunch after mass each Sunday, extending the invite to anyone who wanted to gather around their signature counter/bar space on Davidson Street. Papa's was always the place to go for ice cream for Sunday breakfast.

During the rare moments he wasn't surrounded by welcomed friends or adoring family members, James liked to read, usually multiple daily newspapers from cover to cover, and enjoyed bird-watching along the feeders that lined most of his windows. He indoctrinated many of the new priests across the street with that late afternoon cocktail with Fr. Kennedy and Fr. Remigio from Sacred Heart Rectory.

Calling hours will be held from 4-7 p.m. on Monday, June 10, at Cummings Funeral Service, Inc. and a funeral mass is slated for 10 a.m. on Tuesday, June 11, at Our Lady of the Sacred Heart Church with The Very Reverend Richard Kennedy, MSC officiating assisted by Fr. Jonas Tandayu, Pastor.

The family wishes to thank the staff of Samaritan Summit Village for their wonderful care and compassion. In lieu of flowers, donations may be made to The James and Janice St. Croix Scholarship Fund at the NNY Community Foundation, 131 Washington St. or to Our Lady of the Sacred Heart Church, 320 W. Lynde St., both in Watertown, NY 13601. Online condolences to his family may be posted at www.cummingsfuneral.com.