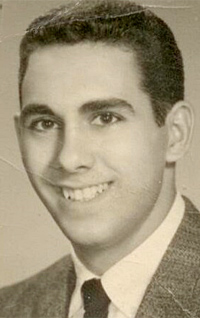 John was born in Watertown on April 10, 1941, son of Robert and Vivian Audette Coleman. He was a graduate of Immaculate Heart Academy and attended night school and achieved his Associates Degree.

He served honorably in the US Army from September 22, 1960 to September 18, 1962, receiving the Good Conduct Medal. For over 50 years, John had a hand in building many homes and businesses, including the Elks Lodge and Cavallario's, as an electrician and general contractor.

He was a communicant of St. Patrick's Church and in his younger years, was an altar boy at Our Lady of the Sacred Heart Church and excelled in basketball and baseball at IHA. John was a member of IBEW Local Union 910. John enjoyed hunting, fishing, canoeing, cooking, watching sports, watching golf and football, and especially spending time with his family and friends. For several years he lived and wintered in Florida.

Donations in his name may be made to either Hospice of Jefferson County, 1398 Gotham St., or Immaculate Heart Central School Booster Club, 1316 Ives St., Watertown, NY 13601. Online condolences to his family may be posted at www.cummingsfuneral.com.