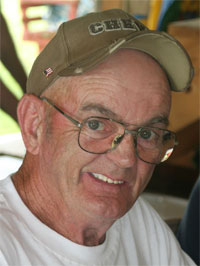 Calling hours will be held at Cummings Funeral Service, Inc., Clayton on Friday, March 22, from 6 - 8PM. The funeral service will be at Depauville United Methodist Church on Saturday, March 23, at 3PM with Pastor Donald Briant officiating. Burial will be in the spring in Depauville Cemetery. Mr. Campbell was born in Wantaugh, Long Island on July 16, 1934, son of Arthur W. and Dorothy Meyer Campbell, and he had attended Martin H. Glenn School, Valatie, NY. On September 4, 1954 he married Janet E. Green at Emmanuel Lutheran Church, Stuyvesante Falls. From 1954 - 1963 he served with the 127th Armored Battalion of the NY National Guard. Arthur worked as a farm machinery mechanic, opened and ran Campbell's Service Center, and sold David Brown tractors, all in Valatie. In May 1973 the couple moved to Belleville. On March 17, 1978 the couple then moved to their farm on Route 12. The farm was a dairy farm from 1978 - 1998, and then a beef farm from 1998 - 2011. In 1995, for his grandson Cody, he began his bale art at the farm with a caterpillar, graduating to several different sculptures. He was a member and trustee of the Depauville United Methodist Church and a former member and trustee of the Muitzelskill Reform Church. For many years he was a Leader for 4H, a member of the board for the LaFargeville Farmers Co-Op, and volunteered for Rural Rehab. Arthur loved to think of himself as a tinker, engineer, problem solver, and story teller. He loved his horses and his many dogs over the years, including his most recent, Bear. He was a hardworking and beloved husband, dad, uncle, and friend. Besides his wife, Janet, he is survived by his four children and their spouses, Arthur W. "Barry" and Jennifer Campbell III, Black River, Tamera J. and Kai Williams, Newport News, VA, Timothy B. and Monica Campbell, LaFargeville, and Bonita C. "Bonnie" and Richard Schmidt, Warrenton, VA; his ten grandchildren and six great grandchildren; one brother and his wife, Francis D. and Jean Campbell, Lake Toxaway, NC; two sisters, Muriel Carlyon, St. Cloud, FL and Beverly Hofstetter, Hudson; and several nieces, nephews, and cousins. His two brothers, Gareth and Daniel, and his sister, Isabelle Rainwater, all died before him. In lieu of flowers, donations in his name may be made to Depauville United Methodist Church, c/o Clayton United Methodist Church, 324 John St., Clayton, NY 13624. Online condolences to the family may be made at www.cummingsfuneral.com.