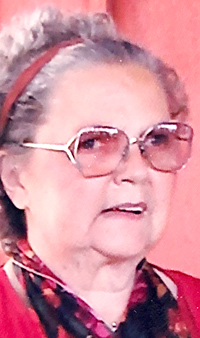 A calling hour will be held at Cummings Funeral Service, Inc., Clayton on Monday, June 3, from 1 - 2 PM followed by the funeral service at 2 PM with Pastor Donald Briant presiding. Burial will be in Clayton Cemetery following the service.

Audrey was born in Watertown on May 15, 1932, daughter of Howard and Isabel Terry Danough and she attended Clayton schools. On July 1, 1951 she married Charles R. Bender at the Clayton United Methodist Church and he passed on December 13, 2006.

She was a top selling Avon Representative for many years, receiving many Presidents Club awards, including a trip to Hawaii. She was a member of the Clayton United Methodist Church and the Colon-Couch American Legion Post 821 Ladies Auxiliary. She enjoyed scrapbooking of local history and researching family ancestry. She and her husband Charles traveled extensively in the US and abroad. They were also founding members of the Clayton Diving Club.

In lieu of flowers donations in Audrey's name may be made to Samaritan Keep Home Activities Fund, 133 Pratt St., Watertown, NY 13601 or TIERS, P. O. Box 524, Clayton, NY 13624. Online condolences to her family may be posted at www.cummingsfuneral.com.