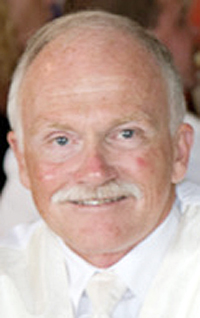 On May 20, 2019 Clayton resident Michael J. Geiss passed away while exercising near his home. He was 71 years old. Mike was born on August 8, 1947 in Troy, NY, son of the late John L. and Genevieve B. Geiss. He grew up in the Albany suburb of Colonie and graduated from Vincentian Institute in Albany in 1965. He went on to receive a B. F. from the SUNY College of Environmental Science and Forestry and a B. S. from Syracuse University in 1969. In his senior year Mike served as President of Kappa Phi Delta, a social/professional forestry fraternity. Later that year he started working for the NYS Office of Parks, Recreation and Historic Preservation in the Planning Unit. He was granted an educational leave of absence and earned a M. S. from Michigan State University. Upon his return he was promoted to the Taconic Region where he was in charge of land acquisition and municipal grants. Four years later he was promoted back to the Planning Unit and was instrumental in compiling the Statewide Comprehensive Recreation Plan. In 1980 Mike moved to Clayton when he was appointed Assistant Regional Director of the Thousand Islands Region and then became Regional Director in 1991. Mike retired from State Parks in 2007 after a 37 year career with the agency. During his tenure with State Parks, Mike worked on many committees, including the agency's Human Resources Committee, Safety Committee, and Affirmative Action Committee. In 1988 he received the Special Achievement Award from the State Council of Parks for his work on the Strategic Planning and Review Committee. Also, Mike represented State parks on the relicensing working group for the NY Power Authority's FDR-St. Lawrence Power Project, securing a sizable funding allocation for the rehabilitation of Robert Moses and Coles Creek State Parks.

Mike married Sandra K. McElheny on August 1, 1970 in Greece, NY and they remained together for 48 years through good times and bad. In 1994 Mike suffered a spinal cord injury during a bicycle ride which made for a dynamic change in both Mike and Sandy' lives. Before his injury Mike was a dedicated runner, having completed 16 marathons. Undaunted by his injury he then took up wheelchair racing. Later in his life Mike could be seen handcycling along many roads in the Clayton area.

Mike served on many volunteer organizations while living in Clayton. He was a member of the Thousand Islands Central School District Board of Education for 13 years, seven of those as President. He represented the Board as voting delegate at five NYS School Board Association Annual Conferences. He took numerous courses offered by the State School Board Association and received the designation of Master of Boardsmanship. While on the School Board he wrote weekly articles for the T. I. Sun about the football team's games and served as a volunteer scoreboard operator for the boy's basketball games. Other positions Mike held included: 11 year member of the Clayton Local Development Corporation, 5 as Chairman; member of the 1000 Islands State Park Commission; lector at St. Mary's Church; volunteer income tax preparer for the elderly and poor at the Community Action Planning Council; member and Treasurer of the Northern Regional Center for Independent Living; member and Chairman of the Clayton Youth Commission; volunteer youth baseball coach; member and Chairman of the Clayton Planning Board; member of the Jefferson County Youth Board; member of the Seaway Council Executive Board of the Boy Scouts of America; member of the St. Mary's Pastoral Council; member of the Clayton Local Waterfront Revitalization Committee; member of the Clayton Comprehensive Plan Committee; and member of the Sackets Harbor Battlefield Alliance. Mike's favorite activities were handcycling and traveling with family and friends. He was also a longtime fan and supporter of Syracuse University sports teams.

Mike is survived by his wife, Sandy, his three sons: Matthew and wife Jennifer of Rockville, MD; Benjamin and wife Anne of Oswego; and Brendan and wife Maria of Syracuse; five grandchildren: Christopher Carlyle, Evan, Michael, Ryan, and Kennedy Geiss; one sibling, Mary (Richard) Provost of Niskayuna, NY; and thirteen nieces and nephews.

The funeral mass will be celebrated on Monday, May 27, at 11 AM at St. Mary's Church with Rev. Arthur J. LaBaff, pastor, presiding followed by burial in St. Mary's Cemetery. A Celebration of Life will be held at 1PM at the 1000 Islands Harbor Hotel on Riverside Dr. in Clayton, all are invited to join the family in remembering Mike. Arrangements are entrusted with Cummings Funeral Service, Inc., Clayton. In lieu of flowers his family would like donations made to The Miami Project to Cure Paralysis, 1095 NY 14th Terrace, Miami, FL 33136 or St. Mary's Church, 521 James St., Clayton, NY 13624. Online condolences to his family may be posted at www.cummingsfuneral.com.