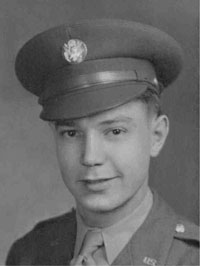 A prayer service will be held at Cummings Funeral Service, Inc., Watertown on Tuesday, March 19, at 11AM with Rev. Steven Murray, pastor of Holy Family Church, officiating. Burial will be at the convenience of the family and there will be no calling hours.

Mr. Mattraw was born in Watertown on November 17, 1922, son of Edward and Henrietta Hirt Mattraw. He graduated from Watertown High School in 1941 and was a member of the National Honor Society. Gordon worked at Brownville Board, the Watertown Daily Times, Eagle Tobacco, and the NY Air Brake before being drafted in 1943.

He served in the 7th Army, 44th Division, 71st Infantry, and fought in the European Theater in France, Germany, and Austria. He fought in World War II from July 1944 to July 1945 and was a Staff Sergeant when he was honorably discharged from Company B, 79th Engineer Batallion. He was a recipient of the Purple Heart, Bronze Star, Combat Infantry Badge, Good Conduct Medal, the NYS Conspicuous Star, and the European African Middle Eastern Campaign Medal with Three Bronze Stars.

He married Helen Burkhard on January 26, 1946 in the rectory of Our Lady of the Sacred Heart Church, and she passed on August 9, 2012.

After the War, he returned to the NY Air Brake where he was a shop clerk. In 1950 he left the Air Brake to open Mattraw's Liquor Store which he owned and operated until 1978. He purchased PlaMor Lanes in 1971 and ran the business until his retirement in 1988.

Donations in his name may be made to either the Helen Mattraw Memorial Scholarship Fund at Immaculate Heart Central, 1 Sterling Place or to Watertown Elk's Club Scholarship Fund, 728 Bradley St., both in Watertown, NY 13601. Online condolences may be made at www.cummingsfuneral.com.