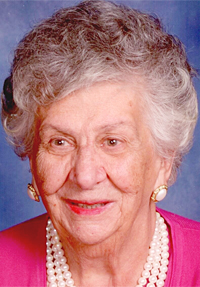 Marie Ann Morgia, 93, of Watertown passed away April 4th, 2019, peacefully surrounded by family and friends. She was under the care of Hospice during her final days.

Calling hours will be held at Cummings Funeral Service, Inc., Watertown on Sunday, April 7th, from 2 - 4 pm. A prayer service will be held at the funeral home Monday, April 8th, at 9 am followed by the funeral Mass celebrated at St. Anthony's Church at 10 am with Rev. William G. Muench presiding. Entombment will follow at Glenwood Mausoleum.

Marie was born on January 31st, 1926 to Anna and Nicholas Canale on Dorsey Street in Watertown. Those neighborhood surroundings created friendships that would last her a lifetime. Daily she enjoyed reminiscing about her friends in the sand flats. She graduated from Watertown High School and met the love of her life, Theodore Guy Morgia. They were married on September 11, 1946 at St. Anthony's Church. Mr. Morgia passed on January 5, 1985.

Marie started out waitressing in restaurants in Watertown and after her marriage, she selectively worked at Morgia's Restaurant as a hostess. Her love of travel was shared with her late husband Teddy and sister Adeline. Throughout her life, especially in her most recent years, Marie could be found playing cards with a group at the kitchen table. She actively participated in Beta Sigma Phi International for over a quarter of a century. She spent many happy years in Winterhaven, Florida with her sister, Adeline.

In lieu of flowers contributions in her name may be made to Hospice of Jefferson County, 1398 Gotham St., Association for the Blind and Visually Impaired of NNY, 131 Washington St., and St. Anthony's Church, 850 Arsenal St., all in Watertown, NY 13601. Online condolences to Marie's family may be posted at www.cummingsfuneral.com.

#8 Beverley Morrison 2019-04-11 02:36
Tammy, Christina, Bruce and families, my deepest sympathy on the loss of your Mother, Marie. My thoughts and prayers are with all of you at this difficult time.
Report to administrator
#7 Jon Fullerton 2019-04-10 03:40
It breaks my heart to read of Marie's passing. I loved visiting their home in Winter Haven (my Mom's home was also in the park, as well as several other people from the homeland). The stories they could tell kept me entertained constantly. And we all would gather at the Sutton/Morgia home for a home-cooked lasagna dinner (because Adeline and Marie knew I love lasagna).. then we'd go out on the screened-in patio and play cards for hours. Usually Marie would pocket the most nickels! I will never forget those times.. or what wonderful friends they were to Mom and me. They provided me with wonderful times, stories, food, and made me feel like a family member. My condolences to Marie's extended family. And to Marie and Adeline, I expect to get my nickels back when we meet again! Much love!
Report to administrator
#6 Julie Derrigo 2019-04-06 20:54
To the entire Morgia Family
I remember back in the early 70’s when my Dad built our Cottage at Morgia’s Beach Marie would always invite me in her kitchen for some thing to eat. When my father couldn’t find me he new I was at Maire’s. Thanks for sharing such a lovely lady & allow my family to your beach. Thoughts & prayers!
Report to administrator
#5 Jeanette Castrello 2019-04-06 19:12
Sorry to hear about your moms passing. I remember all those fish fries we had the cottage. They are all together now.
Report to administrator
#4 Lyons family 2019-04-06 10:35
Heartfelt condolences to the Morgia family from George Lyons, Dorie Lyons, Kevin Lyons, Georgia Kimberley-Anne Rossi and our families. Especially in our thoughts and prayers are Theodora (Tammy), Christina, and Bruce; our family was deeply saddened by the news of your mother's passing. Our family was privileged to have know Marie and blessed to have her in our lives. May treasured memories be a comfort in the days to come.
Eterno riposo, concedere a loro, o Signore, e lasciare che perpetua risplenda ad essi la luce Maggio le ricordo di Dio, riposa in pace, AMEN
Report to administrator
#3 Kathy Claflin 2019-04-06 10:28
Bruce, Tammy, Christina, so sorry for Marie's passing. Thank you Marie for the fun memories with Aunt Jean & Uncle Atzio & family. Rest in peace Marie.
Report to administrator
#2 Richard Hjort 2019-04-06 09:51
My heart felt sympathies for your loveing family. I will always remember the family get togethers at the beach and running around the restaurant. She has been my mom's life long friend and confidant. That will sorely be missed. The growth and success of her family is proof of a life well lived. We will all miss her love and guiding influence..
Report to administrator
#1 Bob Morgia & Mary Mo 2019-04-06 09:20
Our hearts are broken at the passing of aunt Marie. She will surely be missed by everyone she ever came in contact with. I can still see us as kids at the beach and she would always offer us cookies. Please remember all of the wonderful times that the family had with her. It is a sad day for our entire family
Report to administrator
Refresh comments list