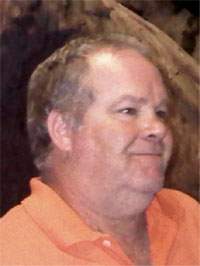 Calling hours will be held at Cummings Funeral Service, Inc., Watertown on Thursday, March 21, from 4 - 8PM. The funeral will be at the funeral home on Friday, March 22, at 11AM with Rev. Steven Murray, pastor of Holy Family Church, officiating and private burial, at a later date, will be in Glenwood Cemetery.

Chip was born in Watertown on April 27, 1960, son of the late Martin G. and Patricia Eden Keegan. He graduated from Watertown High School.

He had worked for Gerken Construction as a roofer, and he was the hill manager for over 20 years at Dry Hill Ski Area, Watertown. For the past 15 years, he has worked as a senior maintenance mechanic for Jefferson County Buildings and Grounds.

While in high school, he was a diver and gymnast. He enjoyed hunting and fishing, gardening, golfing, and snowmobiling. Chip also enjoyed skiing, both downhill and aerial, and had skied with the Western Pro Freestyle Ski Team out west. He built his own beautiful home for his family in Rodman, NY.

Besides his wife, Lisa, Chip is survived by his daughter, Kerri Neal Keegan, SUNY Cortland; his son, Mitchell Neal Keegan, Rodman; his two brothers and their wives, Michael P. and Julia Keegan and Greg ory J. and Karen A. Keegan, all of Watertown; his two sisters and their husbands, Suzanne E. and Michael Biehle, Mason, OH and Kristine K. and Jim Chandler, Coeur d'Alene, ID; two aunts, one uncle, and numerous nieces, nephews, and cousins. Besides his parents, he was predeceased by his brother, Andrew P. Keegan, August 31, 1973.

Donations in his name may be made to Hospice of Jefferson County, 1398 Gotham St., Watertown, NY 13601 or to a charity of your choice. Online condolences to the family may be made at www.cummingsfuneral.com.