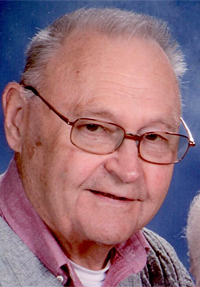 William B. Dulmage, 84, of Watertown passed away Monday, March 4, 2019, at Samaritan Medical Center.

Calling hours will be held on Friday, March 8, from 2 - 4 PM and 6 - 8 PM at Cummings Funeral Service, Inc., Watertown. A prayer service will be at the funeral home on Saturday, March 9, at 9:15 AM followed by the funeral Mass celebrated at St. Patrick's Church at 10 AM with Rev. Donald Robinson presiding. Burial will be in Glenwood Cemetery.

Bill was born in Watertown on May 17, 1934, son of Erwin and Florence (Anthony) Dulmage and graduated from Watertown High School. On October 23, 1954 he married Carol J. LaDuke at St. Patrick's Church with Rev. Divinney officiating.

He entered the US Air Force on January 4, 1955. He received the Good Conduct Medal and was honorably discharged as an Airman First Class on August 13, 1958. He retired from Burns Cascade, the former John Weeks Co., as shop foreman with over thirty years of service to the company.

Bill was a communicant of St. Patrick's Church. He was a Third Degree Knights of Columbus and a former member of the Knights of Columbus Council 259. He was a former player for both the US Air Force Rockets semi-pro football team in Alaska and the Watertown Red and Black. He enjoyed watching sports and was very active in youth sports, coaching for several different youth teams in Watertown. He was an outdoorsman, enjoying fishing, gardening, and traveling, but his greatest enjoyment was his family.

In lieu of flowers, donations in his name may be made to either St. Patrick's Church, 123 S. Massey St. or Sisters of the Precious Blood, 400 Pratt St., both in Watertown, NY 13601. Online condolences to Bill's family may be posted at www.cummingsfuneral.com.

#1 Beverly Harding 2019-03-14 11:49
Bill will be remembered for his many kind acts. The family of Floyd Barber will always think of him as a constant source of help whenever needed, I will always be grateful for having had him in our lives. Thank you , Bill .
Beverly, Rick, Mark, Karen & Terry Harding
Report to administrator
Refresh comments list