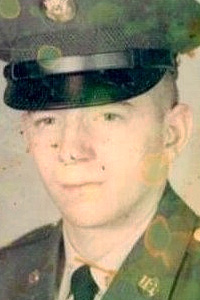 Calling hours will be held at Cummings Funeral Service, Inc., Watertown on Tuesday, January 8, from 5 - 8 PM. A funeral service will be at the funeral home on Wednesday, January 9, at 11 AM with Rev. Christopher Looby presiding.

Ronald was born in Watertown on January 23, 1953, son of Harry E. and Christine L. Baker Booth and he attended local schools. On February 2, 1971 he enlisted in the US Army. He was a proud member of the Airborne Rangers, serving in Vietnam. He received the Bronze Star, National Defense Service, and Republic of Vietnam Campaign Medals, the Vietnam Service Medal with 1 Bronze Service Star, Combat Infantryman Badge, and Expert rating on his rifle. He was honorably discharged on February 20, 1973.

On October 6, 1973 he married Nancy S. Gaylor at Our Lady of the Sacred Heart Church with Rev. Benoit Dostie officiating.

Ron was a civilian employee of Ft. Drum, operating heavy equipment from his military discharge until 1993. He was a former member of St. Patrick's Church, and a current member of the VFW Post 1400 and Eagles Aerie 782. He enjoyed playing keyboard, taking rides on the Harley with his wife, and playing cards. He especially loved spending time with his family and grandson, Logan, and animals, especially Frodo.

In lieu of flowers, donations in Ron's name may be made to SPCA of Jefferson County, PO Box 531, Watertown, NY 13601. Online condolences to his family may be posted at www.cummingsfuneral.com.