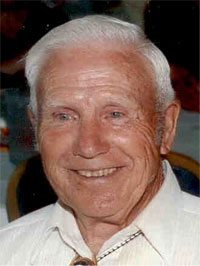 The funeral service will be on Thursday, March 7, at 11AM at Cummings Funeral Service, Inc., Watertown with burial at the convenience of the family in Dexter Cemetery. There will be no calling hours. People are invited to a celebration of his life at American Legion Post 61 after the funeral.

Mr. Crane was born in Canton on June 17, 1920, son of Benjamin H. and Cora C. Paro Crane. He graduated from Carthage High School and did two years of post graduate studies.

He began his career with the US Army Air Corp one month after the bombing of Pearl Harbor. He retired from the US Air Force after twenty-three years of service on February 28, 1965 with the rank of Major. He was a lifetime member of the American Legion Post 61, Watertown and a member of the National Association of Uniformed Services.

He was also a member of both the Elks Lodge 496, Watertown and Moose Club, Florida. The couple had wintered in Florida for many years. Everett enjoyed dancing with his wife, especially at the American Legion, traveling, hunting, playing the violin, and gardening at his home in Chaumont.

In lieu of flowers, the family wishes donations in his name to Hospice of Jefferson County, 1398 Gotham St., Watertown, NY 13601. Condolences to the family may be made at www.cummingsfuneral.com.