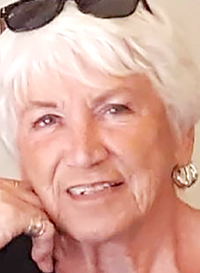 Calling hours will be held at Cummings Funeral Service, Inc., Clayton on Sunday, December 30, from 2 - 5 PM. The funeral mass will be celebrated at St. Mary's Church on Monday, December 31, at 11 AM with Rev. Arthur J. LaBaff, pastor, presiding. Burial will be at the convenience of the family in the spring in St. Mary's Cemetery.

Bette was born in Perch River, town of Pamelia on October 27, 1931, daughter of the late Kenneth and Marie Phillips Sanford. She was a graduate of LaFargeville High School and attended the Watertown School of Commerce.

On May 13, 1953 she married the love of her lifetime, Richard L. Ingerson in Rosiere. Together they enjoyed golfing, playing in leagues at the C-Way Golf Course, raising their children and spending time with great friends in the community. "Ours was something special," no greater love story was ever told, one for the ages – Richard passed on June 6, 1971.

Bette dedicated her life to her children and their families. She was a communicant of St. Mary’s Church where she also taught religious education; Bette also worked summers at the Thousand Islands Inn.

Bette’s legacy will live on in her two daughters and their husbands, Toni M. and Paul Ingenito, Springfield, VA and Tina M. and Thomas Schuth, Spencerport; six grandchildren and two great-granddaughters, Paul and Amanda Ingenito and their two daughters, Adrianna and Isla (who was born on the day of her great-grandmother's passing), Brandon and Aline Ingenito, Richia Ingenito, and Shane, Erik, and Cassandra Schuth; five siblings and their spouses, Donald and Sally Sanford, Alexandria Bay, Shirley and Charlie Melara, Watertown, Gwendolyn and Dennis Kirkby, LaFargeville, Thomas and Christine Sanford, Watertown, and Suzanne and Noel Longton, LaFargeville; three sisters-in-law, Beverly Sanford, Dexter, Martha Sanford, Chaumont, and Mary Lou and Christopher Muggleton, Clayton; and numerous nieces, nephews, and cousins. Her two brothers, Richard and Kenneth Sanford, died before her.

In lieu of flowers, donations in Bette's name may be made to the Lipson Cancer Institute, 1415 Portland Ave., Suite 245, Rochester, NY 14621. Online condolences to her family may be posted at www.cummingsfuneral.com.