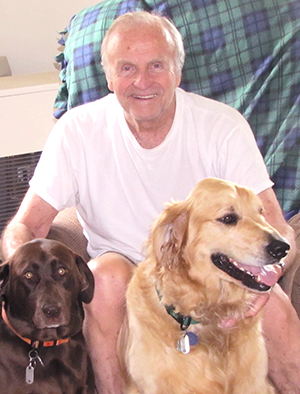 Carl R. Sherman, 86, formerly of Syracuse passed away at his home in Clayton on Wednesday, December 26, 2018.

There will be no services at this time and arrangements are entrusted with Cummings Funeral Service, Inc., Clayton.

Carl was born in Syracuse on December 31, 1931, son of the late Paul and Isabelle Coyne Sherman and he was a graduate of Valley High School, Syracuse. On January 25, 1951 he entered the US Marine Corps. He received the National Defense Service, United Nations Service, and Good Conduct Medals and also the Korean Service Medal with two stars. He was honorably discharged as a Sergeant in the Marines on January 14, 1954.

Carl worked for NY Telephone and then for AT & T in Syracuse for a total of 36 years. He had been a member of St. Paul's United Methodist Church in Syracuse. He enjoyed woodworking, keeping fit by running, bike riding, swimming and walking, and had a love of the outdoors. While his children were growing up, Carl and Barb enjoyed taking them camping. His love of his family was paramount for him.

In lieu of flowers donations in Carl's name may be made to Hospice of Jefferson County, 1398 Gotham St., Watertown, NY 13601. Online condolences to his family may be posted at www.cummingsfuneral.com.

#7 Sandy Stedman 2019-03-26 21:10
Hi Dad, God I miss you so much. I talk to you often and I hope you can hear me. I have this dream a lot where I’m dreaming you are hugging me and I wake up from it feeling like it actually happened. I have to believe that it is you and that you are comforting me in my sleep. You are so missed by everyone, you were our stability, the glue that held us together. I know that Aunt Bev is with you now and that gives me some comfort knowing you are together. I know you are now our angel, watching over us and keeping us safe. I just don’t know how to live without you. I just hope you know how much I love you and how much you are missed. I will always treasure the time I spent with you in your last days, it meant so much to me. I love you Dad
Report to administrator
#6 Monique Christensen 2019-01-21 22:01
I'm sending hugs to the Sherman & Stedman family during this difficult time. I can't believe he's gone. I will remember his kindness, humility and loving devotion to his family, always with a smile.
Love,
Monique, Ty & Donovan

Report to administrator
#5 Sandy Sherman Stedman 2019-01-14 15:55
Hi Dad, I hope you can see this. I still can't believe you are gone. You were so many things to me, my rock, my security, I could always go to you for anything and I never felt any judgement from you, only unconditional love. There are so many things I wish I had told you including how proud I was to be your daughter. Someone very wise remarked to me after you passed that you were always working on trying to become a better person, reading books, etc., never realizing how wonderful you already were. There was a very big hole left in our family after you passed and we are trying to learn how to live without you but it is so very hard. You worked so hard all your life providing for us but not only that, you and mom did so much for us when we were younger to make sure we had so many wonderful memories to look back on, the skating rinks, the baseball field, camping, we had such a great childhood and it wasn't until I became a parent that I realized how hard it must have been, getting home on a Friday evening after having worked all week just to have to pack up the car, drive 2 or 3 hours, pitch a tent or set up the trailer, and deal with 5 kids and a dog all weekend in a very small space. I don't know how you did it. I only hope I have given my kids a quarter of what you gave me. I love and miss you so much, you have always been (and will always be) my superhero.
Report to administrator
#4 Carol Egan Heveron 2019-01-01 12:54
My sympathies to all of the Sherman family. My memories are of what a kind and wonderful man Carl was and the unconditional love he had for his family. I hope and pray that all of your hearts will be filled with these wonderful memories to carry you through this difficult time. Sending love and prayers from Florida.
Report to administrator
#3 Sue Keiber Cross 2018-12-29 10:15
My heart breaks with news of your loss. Mr. Sherman was always such a bright spot in our neighborhood growing up. His kind eyes, warm smile and genuine interest in you always made you feel as if you were not just a neighborhood kid, but someone very important. I will always treasure the memories he created for us with ice skating in the winter and long walks to get ice cream in the summer. My wish for your family is to know just how loved you all are and that the stars in heaven just got a little brighter with him there.
Report to administrator
#2 Jeanie brogan 2018-12-29 08:57
Hi I was so sorry to hear about carls passing. It brought back so many memories of all the wonderful things he did for us kids in the neighborhood. Basketball court baseball field and the ever famous ice skating rink as well as the bonfires and of course taking us all up to the camp. He was truly one of a kind. He will be in my memories always as a kind and loving man. I hope all you shermans are doing well well. Carl will be remembered !!!!!
Report to administrator
#1 John Schafer 2018-12-28 19:28
Arianna and I wish to express our most sincere condolences to your family.Your husband, father, grandfather was always a person to look up to and respect. I will never forget all he did for us as kids growing up in the neighborhood. The swing set he made for his grandchildren is now used by my grand kids out in the field where we played so much as kids. Every time I go out to the field I think fondly of him and your family. We wish you peace and love during this most difficult time.
Report to administrator
Refresh comments list