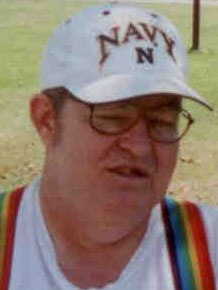 Joseph G. Marshall, 59, Watertown, formerly of Clayton, died February 18, 2013 in the emergency room at Samaritan Medical Center. He had been in failing health for several years.

The funeral mass will be at St. Mary's Church, Clayton on Saturday, April 20, at 11AM with Rev. Arthur LaBaff, pastor, officiating and burial will be in St. Mary's Cemetery. Arrangements are with Cummings Funeral Service, Inc., Clayton.

Mr. Marshall was born in Albany on June 30, 1953, son of William R. and Anne Patricia McNamara Marshall. He graduated from Thousand Islands High School in 1971. A marriage to Lisa Anne Siloa ended in divorce.

On June 27, 1972 he entered the US Navy. He received the National Defense Service Medal and had served aboard the USS Flint. He was honorably discharged on June 4, 1976.

Joe had delivered papers for the Watertown Daily Times, and had worked for both Kelly Services in the recycling department and for McCormick's Restaurant, Clayton.

While in high school, he lettered in wrestling, played basketball, and did theater. He was an avid reader, loved to stay in contact with his family, tried to help anyone he could, and loved to make carrrot salad and quiche.

He was very active with His Way Ministries and enjoyed attending and leading Bible Studies at Midtown Towers. Joe volunteered for Habitat for Humanity and was a lifetime member of American Legion Post 61.

He is survived by his daughter, Jennifer Lynn Marshall, Hayward, CA; brother, John J. Marshall, Vail, AZ; an aunt and her husband, Rita and Leonard Valeo, Crofton, MD, several nieces and nephews from northern NY and Oregon and cousins in the Buffalo area. Besides his parents, Joe was predeceased by his brother, Kenneth J. Marshall who died on October 25, 1958.

Donations in his name may be made to His Way Ministries, P. O. Box 400, Ottawa, KS 66067. Condolences to the family may be made at www.cummingsfuneral.com.