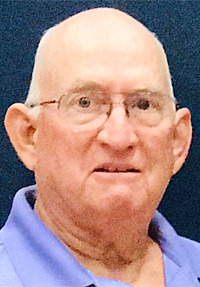 David C. Johnson, 73, town of Cape Vincent passed away at his home on Saturday morning, November 3, 2018.

Calling hours will be held at Cummings Funeral Service, Inc., Clayton on Thursday, November 8, from 4 - 7 PM. The funeral service will be on Friday, November 9, at the United Church of Cape Vincent at 11 AM with Rev. Nancy Stanley, pastor, presiding followed by burial in Riverside Cemetery, Cape Vincent.

David was born in Watertown on December 4, 1944, son of Hubert N. and Barbara Kilborn Johnson. He was a 1962 graduate of Cape Vincent High School, attended Brockport State, received his B. A. from JCC. On June 12, 1965 he married Sharon Bourquin at Three Mile Bay Baptist Church with Rev. Maynard Waterman officiating.

He had worked for Riverdale Dairies, a milk bottling company owned by his father, for Citizens Bank, Cape Vincent, and then ran his family's farm. He then began his career with US Immigration on Wellesley Island, working as an officer, then a Free Trade Examiner. After 9/11 the immigration department merged into US Homeland Security and he retired as a US Customs and Border Protection Examiner on June 30, 2007 after 30 years of service to his country.

David was a member of the Men's Senior Golf League and a former member of the Lions Club in Cape Vincent. He enjoyed crossword puzzles, Sudoku, golfing, hunting, traveling, and especially spending time with his grandchildren. Gardening was his passion and his lawn was his pride and joy. The couple has wintered in Melbourne, FL since his retirement.

Along with his wife, Sharon, David is survived by his two sons and their wives, Scott N. and Lisa I. Johnson, Clayton and Christopher D. and Grace "Gigi" Johnson, AL; four grandchildren, Jessica, Courtney, Victoria, and Owen; mother-in-law, Wava Bourquin, Watertown; sister, Judith A. Veitch, Syracuse; and several nieces, nephews, and cousins. He was predeceased by his parents, brother, Gary E. Johnson, April 28, 2001, and sister, Cheryl J. Kildea, June 5, 1990.

In lieu of flowers, David's family would like donations in his name to the Clayton Volunteer Fire Department, 855 Graves St., 1000 Islands Youth Hockey, PO Box 278, or the Clayton Youth Commission Booster Club, POX 191, all in Clayton, NY 13624. Online condolences to his family may be posted at www.cummingsfuneral.com.