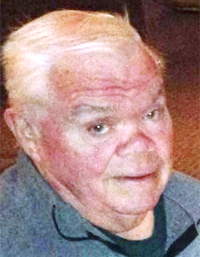 DALE ALBERT KENYON passed away on October 18, 2018 at his home in Clayton, NY from natural causes. Born in Watertown, NY to George William Kenyon and Ruth Skinner Kenyon on September 6, 1939, Dale graduated from Clayton Central School in 1957 and Clarkson University in 1962 with a bachelors degree in business administration. During Dale's career he worked for Frink America in Clayton, New York Air Brake Corp. in Watertown, Viking-Cives USA in Harrisville and, for many years, for Gray's Wholesale Inc. in Clayton, NY.

As a young child, Dale was stricken with rheumatoid arthritis. This disease stunted his height and presented lifelong challenges. His first major trip from Clayton was in 1953 when he traveled by train with his Boy Scout Troop 46 to Oceanside, CA to attend the national jamboree. Forever supportive of the Boy Scout organization, he was the Troop 46 Scoutmaster for 17 years, taking the troop to the National Jamboree in the 1970's. For that event he constructed a very large replica of the Thousand Islands Bridge which was used as the entry feature for the entire event. He was recognized by the Boy Scout organization for exceptional service to the council when he was awarded the Silver Beaver Award in the 1990's.

Community service was very important to Dale. He was elected Mayor of the Village of Clayton for 10 years and a Town of Clayton board member for several years, participating in the re-enactment of the signing of the Town of Clayton charter on its sesquicentennial anniversary in 1983. He was a member of the Clayton Volunteer Fire Department for over 50 years including several decades as Treasurer. He led the construction for the Thousand Islands Arts Center addition at 314 John Street to accommodate the handweaving center, and has been an active board member for the Thousand Islands Museum, Antique Boat Museum, Clayton Cemetery Association, The Clayton Opera House, Jefferson County Planning Board, Clarkson University Delta Upsilon Chapter, The Thousand Islands Foundation, Inc. and TIERS.

There will be no calling hours and burial will be at the convenience of the family. Contributions in his memory may be made to TIERS, 885 Graves Street, Clayton, NY 13624. Arrangements are entrusted with Cummings Funeral Service, Inc., Clayton and online condolences to his family may be posted at www.cummingsfuneral.com.

#4 Lou/Rose Montante 2018-10-22 06:10
Our deepest sympathy. Sorry for your loss.
Report to administrator
#3 Dennis Honeywell 2018-10-20 10:20
I worked both for and with Dale for many years and found him to be fair and friendly. He taught me a lot about trees and flowers when we were developing Recreation Park. I liked Dale as both a friend and a helper. Rest In Peace...
Report to administrator
#2 Gerry Kostyk 2018-10-20 08:01
Dale was my assistant scoutmaster at the National Boy Scout Jamboree held at Farrogut State Park, Idaho in 1969. The lights on the replica of the TI Bridge he had built for the jamboree were helpful to guide us back to our campsite at night. I have kept up with Dale through the years by being involved with the volunteer fire service. Dale was a great leader and will be missed.
Report to administrator
#1 nancy humphrey 2018-10-19 19:21
So sorry to see about Dale passing away. He was a fixture in Clayton, It will be sad to not see him tending to his flowers or sitting outside his door with a friendly wave to all that he knew and who knew him. I worked for Dale at the NYAB Co. many years ago and he was a kind boss. He will be missed. May he rest in peace.
Report to administrator
Refresh comments list