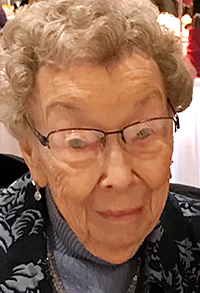 Marjorie A. Hyde, 99, passed away at her home in Watertown NY on October 12, 2018. She was born in Carthage, NY on March 4, 1919, a daughter of William H. and Lillie Cancross Wallace. After the death of her parents, Marjorie and her identical twin Margaret were raised by their Uncle and Aunt, Robert and Hattie Jacobs. She lived most of her life in Watertown, NY. Marjorie was preceded in death by her first husband John D. Cartin in 1968. She later married Charles R. Hyde who passed away in 2011.

Marjorie graduated from Copenhagen High School in 1937. Following high school, she dedicated the next 44 years of her life to patient care as a compassionate nurse. She was a 1940 graduate of The House of the Good Samaritan Nursing School, where she first worked as a nurse for the medical surgery unit. Marjorie worked as a private duty registered nurse for much of her career. She later worked as a nurse supervisor at the House of the Good Samaritan until she retired in 1984.

Marjorie enjoyed bowling and was a league member. She was a loyal fan of Syracuse University Basketball. She also enjoyed golfing, was an avid player into her 80's, and a member of the Watertown Golf Club. Being a skilled bridge player, she thoroughly enjoyed the game and played up until her passing. She was a member of the N.N.Y. Bridge Club and American Contract Bridge League.

A special thanks to our loyal and faithful friends Roxy and Ray Akins and her kind neighbors Dr. and Mrs. Paul Michaelson.

A funeral service will be held at First Presbyterian Church on Monday, October 22, at 11 AM with Rev. Fred G. Garry, pastor, presiding. There will be no calling hours and burial in Brookside Cemetery is at the convenience of her family. Arrangements are entrusted with Cummings Funeral Service, Inc., Watertown.

In lieu of flowers memorial contributions can be made to Hospice of Jefferson County, 1398 Gotham Street or Jefferson County Historical Society, 228 Washington Street, both in Watertown, NY 13601. Online condolences to Marjorie's family may be posted at www.cummingsfuneral.com.