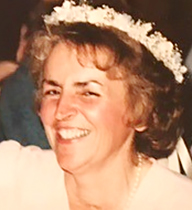 Mary Bastian, 80, passed away at her home in Clayton surrounded by her family on Saturday, September 29, 2018.

Calling hours will be held at Cummings Funeral Service, Inc., Clayton on Tuesday, October 2, from 4 – 7 PM. A prayer service will be at the funeral home on Wednesday, October 3, at 2:15 PM with the funeral mass directly following at St. Mary’s Church at 3:00 PM followed by burial in St. Mary’s Cemetery.

Mary was born on May 21, 1938 during the Great Depression. She was the daughter of Lyle and Teresa Whalen Hall who were dairy farmers in Antwerp, New York. When Mary was still young, the Government purchased their property for the expansion of Camp Drum which is now Fort Drum. The family then moved to Oxbow where they purchased another large dairy farm which was managed by the family.

Mary attended a one room school house for five years before graduating from Antwerp High. She graduated from Ithaca College in with a B.S.in Physical Education. Mary began her teaching career at Clayton Central School, now Guardino, which is where she met and worked with her future husband to be, Robert Bastian Sr. On August 18, 1962 the two wed at Holy Family Church in Watertown, NY. Mary was predeceased by Robert in March of 2004.

Shortly after marrying the couple started a family and with two young children they put their teaching careers on a back burner and moved to Morrisville, NY where they purchased three businesses which they ran for several years before purchasing a large 18-hole golf resort named Marble Island just outside of Burlington VT in Winooski. In 1971 the family returned to Clayton where she resided until her death. Mary spent what little free time she had in the summer months from teaching, volunteering for special needs children and giving to her community for 25 years with the Clayton Youth Commission where she served as a coach, secretary and most importantly a mentor!

Although she taught at BOCES, Lyme, and Cape Vincent schools, her career came full circle when she joined the staff at Thousand Islands High School where she eventually retired from in 1996. She coached for many years the girls’ varsity soccer, volleyball, basketball, and softball teams and has far too many championships and accolades to list, but even had an entire day named for her at the school affectionately dubbed, B Day!

Mary never stood on the sidelines and coached, she was on the field like her players and spent gym class with her students playing along and teaching them by example as well. When not coaching her own team she could be found inside or even outside a skating rink where she was a hockey mom to both of her children for 20 years.

Probably Mary’s biggest passion outside of her family was golfing. She was a charter member of the Clayton Ladies Golf League and served as secretary/treasure for fifty years where she begrudgingly handed over a filing cabinet full of stats only just recently. Amazingly, she had 5 holes in one.

Mary was a devoted communicant of St. Mary’s Church, member of the Knights of Columbus Auxiliary and past secretary. Mary was also an Auxiliary member of Colon Couch American Legion Post 821. Founder and Host of Western Night for approximately 20 years. Mary and her husband Bob took the Sr. Girl Scouts to the World’s Fair in 1964 in Flushing NY. Mary served as a Girl Scout leader but also was the cookie mother for many years as well. She enjoyed volunteering at the T. I. Museum and the Handweaving Museum and playing all kinds of card games, especially Bridge, mahjong and poker. She was a member of the NYSUT Union and NYS Retired Teacher's Assoc.

The family will be hosting all friends and family at O’Brien’s Restaurant immediately following the graveside service on Wednesday.